A Bad Idea: Sheriff’s Coronating Successors By Retiring Mid-Term
Each year when we publish our popular and well-read Top Twenty Bills To Veto column, where we instruct the Governor on which of the hundreds of bills on his desk are most toxic, we always get a lot of reader feedback on the various bills.

Many of these terrible bills are not on the radar of even informed FlashReport readers until we run that column.

One bill that we highlight which has really sparked a lot of feedback is Assembly Bill 482 (Mendoza) which, if signed by the Governor, would prohibit an employer from using someone’s credit history when deciding whether or not to hire that person.  Seriously.

In sifting through the emails that I got on this bill, I received one that peaked my interest because the title of the e-mail – AB 482 and Richard Kimball.  Fellow movie buffs would recognize that name as the identity of The Fugitive in the 1960’s TV series of that name – and perhaps more recognizable would be the 1993 big-screen version of The Fugitive, where Kimball was played by Harrison Ford.  But I did!

Turns out that apparently the Richard Kimball that was being brought to my attention is not one who allegedly murdered his own wife (a la the film), but rather the Undersheriff of tiny Nevada County

Ironically, while AB 482 is a bad bill that should be vetoed for the unfair restrictions that it places 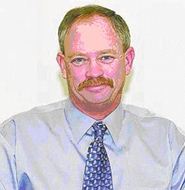 on employers, one of the (few) exemptions to its language prohibiting the use of credit checks by potential employers is for law enforcement positions.  So my reader should be content knowing that the Board of Supervisors will be able to consider Kimball’s (pictured) past bankruptcy and any other issues when deciding whether to hire him for this as-of-yet-not-available position – whether AB 482 passes or not.  A Google search on Kimball shows that a few years back he was President of the County Sheriff’s public employee union – so it likely that union has passed around enough resources to County Supervisors to give Kimball a “leg up” over other applicants when the time comes.

Of more concern to me than the personal finances of a small county Undersheriff is the idea that there could be a premeditated effort at work to “coronate” a Sheriff, attempting to circumvent the democratic (small d) process.  This happens all too often.

If someone runs for and is elected to an office for a term of service, that individual has a moral responsibility and obligation to serve their full term in office.  Yes, I was and still am critical of Alaska Governor Sarah Palin’s decision to exit the Governorship of Alaska mid-term.  Sheriff Royal should not pull a “Palin” and walk away mid-term.  On the contrary, he should serve out his full term.

Retiring mid-term is a very effective route to “kingmaking” a successor.  A recent example of this “backroom dealing” took place in San Diego County.  In 2009, long time Sheriff Bill Kolender stepped down mid-term, appointing his Undersheriff Bill Gore as Acting Sheriff.  Gore was easily elected in his own right to the office this year.

Another example where a Sheriff retired mid-term and tried to have his hand picked successor appointed as Sheriff would be El Dorado County..  In that county Sheriff Jeff Neves tried to get the Board of Supervisors to appoint his chosen successor, Capt. Craig Therkildson.  The Board rejected this request from Neves, and appointed the Undersheriff (who was not running for the job) to fill out the term. 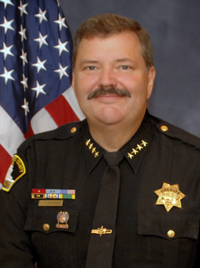 An example of a Sheriff respecting the democratic process would be Sheriff John McGinness of Sacramento County (pictured).  Sheriff McGinness is retiring this year, and while he has a favorite that he has endorsed to succeed him (a Captain in his department), note that McGinnis did not quit mid-term to try and give his candidate a big, but unfair advantage.

AB 482 is a bad bill that should be vetoed for the unfair restrictions that it places on employers,  That said, signed or not, there is nothing about this bill that would prevent voters from considering the poor credit history of a candidate for Sheriff when deciding whether to put them in charge of their local law enforcement agency.  But that is exactly where such information should be vetted – in a fair and open election, that hasn’t been “gamed” by insiders to produce a preordained outcome. (population 92,033).  Apparently Kimball is favored to succeed County Sheriff Keith Royal (whom I have had the opportunity to meet).  According to this FlashReport reader, Kimball has a troubled financial past that includes a bankruptcy (this is easy enough to check as such things are public documents).  Word around Nevada County is that Royal, who was re-elected this year, will potential step aside mid-term – naming Kimball as Acting Sheriff, paving the way for the County Board of Supervisors to appoint Kimball to the job.  It’s  a pretty big leg-up to go into an election with the title Appointed Sheriff…