How, Exactly, Some Cities Are “Smart” and Others Might Become It

How, Exactly, Some Cities Are “Smart” and Others Might Become It

In the field of urban innovation, perhaps no topic is as hot right now as that of the “smart city.” But a new study finds that when broken down into its component parts, the approach is far more unevenly distributed than its catch-all label might imply — and that a better understanding of the concept, married with knowing the characteristics of a local place, can help predict which cities will get smart how.

Paolo Neirotti, Alberto De Marco, Anna Corinna Cagliano, Giulio Mangano and Francesco Scorrano are a team of researchers in the Department of Management and Production Engineering at Politecnico di Torino, a public engineering university in Turin, Italy. Their study is published in the most recent completed issue of the journal Cities. The goal of their work was to figure out whether, in a time of “limited empirical evidence” and “hype,” can a shared definition of the smart city concept be created? And if it can be, does it help explain how it has, and hasn’t, spread thus far?

The “smart city” is an extension of the long-held understanding that cities fundamentally operate as systems, with interlocking parts and repercussions that can resound widely. In that context, discussions of the smart city tend to focus on the uses of technology to maximize the potential of the system, with a focus on increased sustainability. But what hasn’t been in the spotlight as much is whether the notion of the smart city means something different in Asia than in does in North America, and not to mention in a city of 100,000 people compared to one of 10 million. Attention is turning now to appreciating whether that lack of commonality has restricted the debate and slowed down the spread of useful innovations.

To start building their taxonomy of the “smart city,” the authors reviewed the literature and found two strains of practical initiatives in the field playing out in cities around the world. One strain they callhard approaches, which are characterized by the networked sharing of data. An example would be the use of a centralized system of traffic sensors that pick up signals from around the city, process them, and then act on that new knowledge, where the increase in productivity is a smoother rush hour. The other is one of soft approaches, centered on increasing the capacity of a city’s people to learn and innovate, with a focus on fostering a place where citizens solve their own problems. A soft approach might be creating tech incubators or distributing information on crime prevention.

The Italian researchers then looked at 70 cities that have engaged in “smart cities” work, selecting them on the basis of their inclusion in the Intelligent Community of the Year award given by the Intelligent Community Forum, the assessments of technical analyst firms, and their mentions on the websites of the companies actively pursuing the smart cities idea, including IBM, Siemens, and Cisco. Each of the five authors independently ranked each of the 70 cities on whether they are attempting so-called best practices in both hard and soft categories, awarding a 1 or a 0 to create what they call a “coverage index.”

The result? Cities today that are engaged in some smart-city approaches are more likely to be invested in “hard” initiatives in the fields of transportation and mobility, natural resources, and energy, and less so in “soft” fields like government transparency. 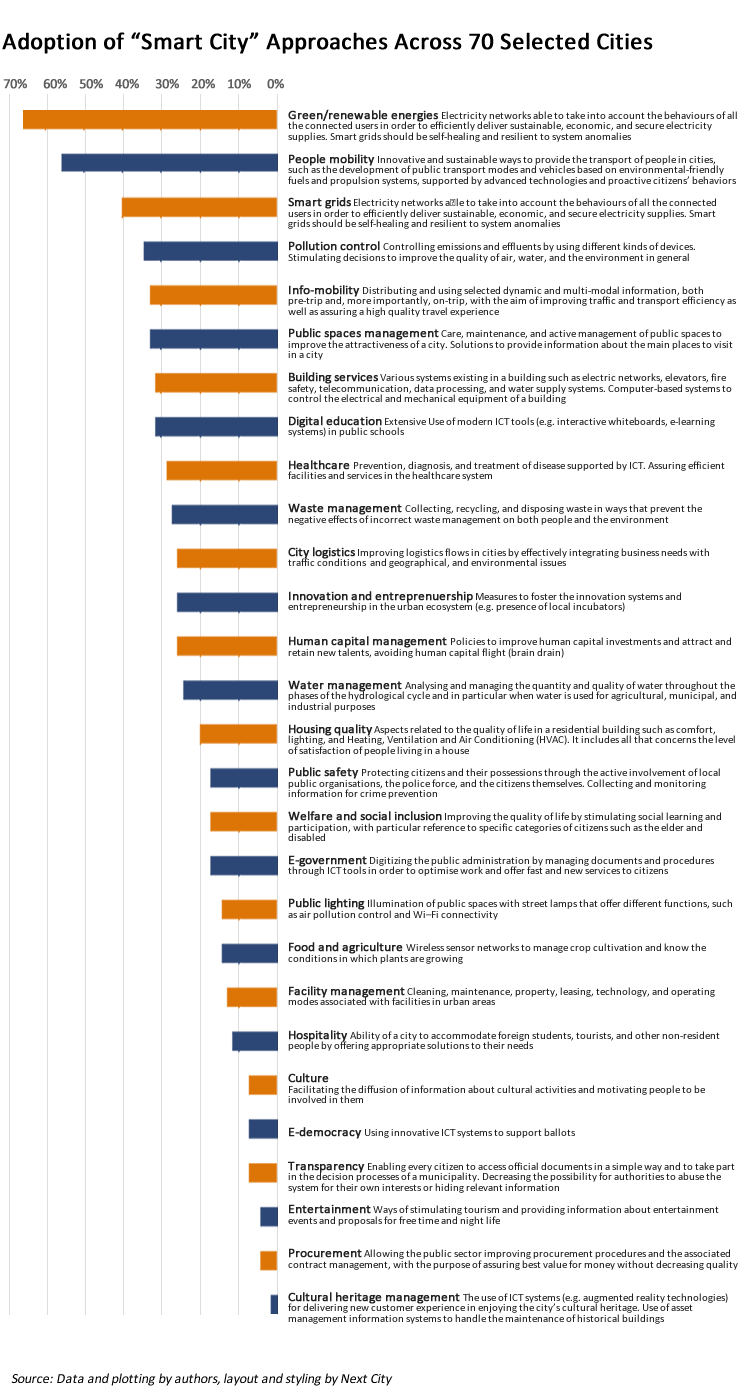 Those levels of diffusion were the researchers’ primary concrete finding, but the results get even more interesting once you drill down into what they suggest. Asian and European cities, for example, are more likely to have embraced “smart initiatives” than their counterparts in the Americas. Within that bucket, though, Asian cities have focused on hard progress and European ones on soft progress, the latter result being one that the authors attribute in part to satisfying the Lisbon Strategy, the European Union’s development plan for knowledge-based growth adopted in 2010.

Using other metrics that differentiate cities, the researchers were able to begin examining which urban factors shape how these approaches are adopted.

Some of what they found is intuitive. Technological advancement — here the authors use Internet connectivity as a proxy — can indicate a readiness to diffuse smart-solutions, such as the spread of an app letting citizens know when the next bus might arrive. Economic development, too, seems to support “smart”-ness, as it indicates the availability of resources to make system-wide improvements. Moreover, “cities with a greater economic development appear more attractive to those people who wish to increase their standard of life,” they write, “and they are thus in a better position to develop their human capital.” That’s important because “citizens with more human capital are more likely to be end-users (or active contributors in the development stage) of new software tools aimed at improving the quality of urban life.”

But other findings are less expected. Density seems to matter; it can help support the spread of technological solutions that benefit from a critical mass of users. But size can be a challenge, too. Bigger cities, the authors note, can find it more difficult to experiment with system-wide solutions because their systems, whether lighting or sewers, are too complex for holistic approaches. This is in part because they’re especially daunting for the vendors often charged with implementing new approaches. The same factor can play two ways: bigger transportation systems may be more resistant to “smart” efficiencies because they duplicate efforts to deal with the crush of travelers, but at the same time their demand can be an incentive to start exploring smart solutions.

In that same vein, cities with poor environmental conditions, they suggest, can be ready settings for ‘greening’ programs since the benefits in terms of both quality of life and public appreciation can be greater than in places that are already more environmentally sound.

Understanding how smart solutions play out in practice requires, too, the researchers write, a knowledge of the characteristics of the countries in which they sit, from levels of corruption to climate conditions to how centralized decision-making is there. “Cities in countries with a lower degree of transparency in public administration processes,” they write, “are more likely to sustain e-government initiatives, which shows that SC [smart city initiatives] are exploited in some domains to invert their structural attitude.”

What this approach does is allow the researchers to start forming a framework for understanding which smart-city initiatives are likely to flourish in which settings. The authors point to the widespread adoption in Asian cities like Singapore, Seoul and Hong Kong, which display a combination of conditions that lend them themselves to “smartness”: “a centralized governance favouring shorter decision-making processes for public investments and more rapid development times for their execution, a high economic development rate, a low political risk, and unique weather conditions that determine particular needs, with special regard to transportation systems.”

Neirotti, De Marco, Cagliano, Mangano and Scorrano’s paper is a contribution to the on-going discussion of whether “smart cities” can go beyond a one-size-fits-all marketing term applied to any use of technology in the city sphere to a testable field of study that doesn’t ignore, but is informed by, urban factors like geography, infrastructure, culture and demographics.

The authors acknowledge that theirs is but a first attempt, but one thing that it seems to make clear is that urban “intelligence” comes in all sorts of forms, and cities will be most successful maximizing theirs if they begin with the approaches best supported by the city they are now, with an eye on later implementing solutions for the city that they want to be.