San Francisco-based photographer Robert Dawson has visited and snapped images of hundreds of public libraries across the United States. Now he’s turned the work of decades into a book, the recently released The Public Library: A Photographic Essay.

The roots of the project go back to Dawson’s childhood. “I came up as a young teenager in the 1960s, the Vietnam War period,” he explains. “It was a very divisive time with lots of anger and hatred. I always wanted to find ways to bring us together rather than divide us.”

He learned that people in every nook and cranny of the country saw similar meaning in their libraries. “There is, pretty universally, passionate support for the public library,” says the photographer. “Abilene, Texas, has an extremely conservative population. They passionately love their library as much as people here in liberal San Francisco. So that, to me, is kind of encouraging. It actually means that we maybe have more in common as a country than what separates us.”

Why that embrace? “It’s not a simple answer,” he says. “Libraries are complex organizations.” But he pauses and offers this: “Even if they hardly ever use their library, people have an identification with it as home. That’s where they live, what they’re about, where they’re from.” He goes on. “I think that’s one reason why people maybe want to support libraries more than other forms of government.”

All of Dawson’s photographs are gorgeous and powerful, but I asked if he would share some that show libraries that were particularly significant to the communities in which they stood. At first, he demurred: “In my experience, most of libraries that I photographed were important, some even critically important, to their communities.” But in the end, he chose these six and told their stories. 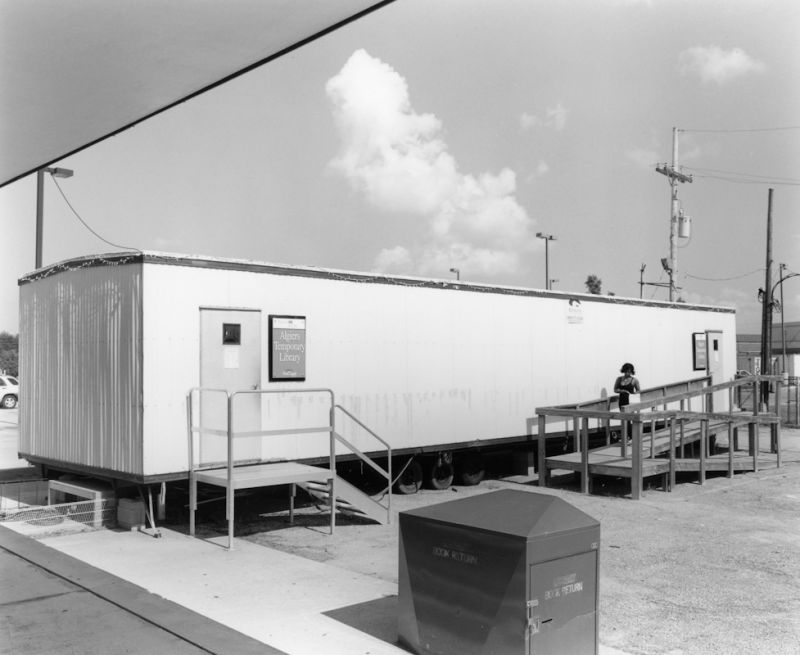 “When we were there photographing in New Orleans, it was about three or four years after Katrina. The entire library system in New Orleans had been flooded, almost all the employees were laid off, and half the books were destroyed. It was a huge disaster. They had had a somewhat functional library system before that, but now, really, a lot of the libraries are like this: a trailer with AC, in hot, humid New Orleans. It’s just this heroic effort to keep the libraries open. They were all packed and the people there really use them, even though it is, even today, almost still a disastrous situation. It spoke to me. The urgency of libraries, and the need for libraries, that doesn’t just go away because there’s a natural disaster.” 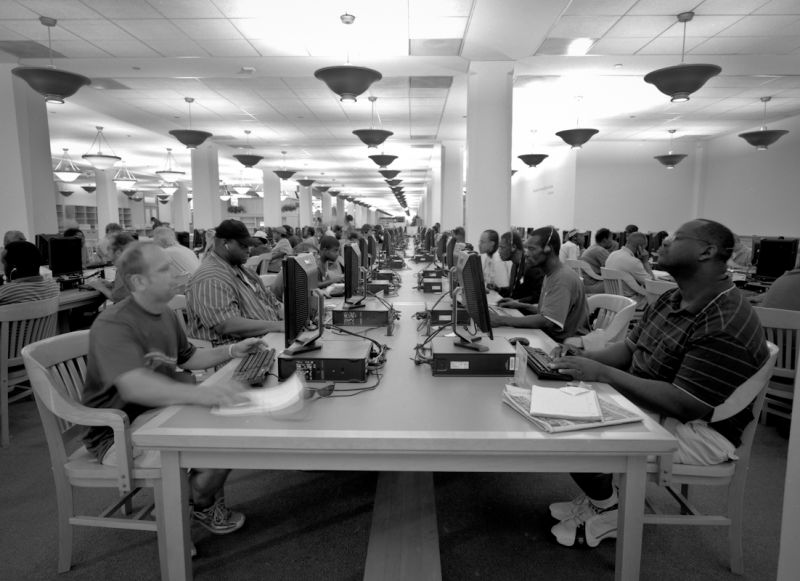 “Chicago’s public library is one of the great library systems in the country, and they had several rooms just like that filled to infinity with people using the computers. It shows one of the evolving things that came out of the libraries over the project. When I started, 20 years ago now, this was not even part of what libraries were about. Today, it is a huge part of it. You can see here that every computer is full. Every person is intent. And it’s like this all day long in one of the giant big public libraries in the nation. Libraries now are still about books. They’re still about many things. But computers have become a big part of them.” 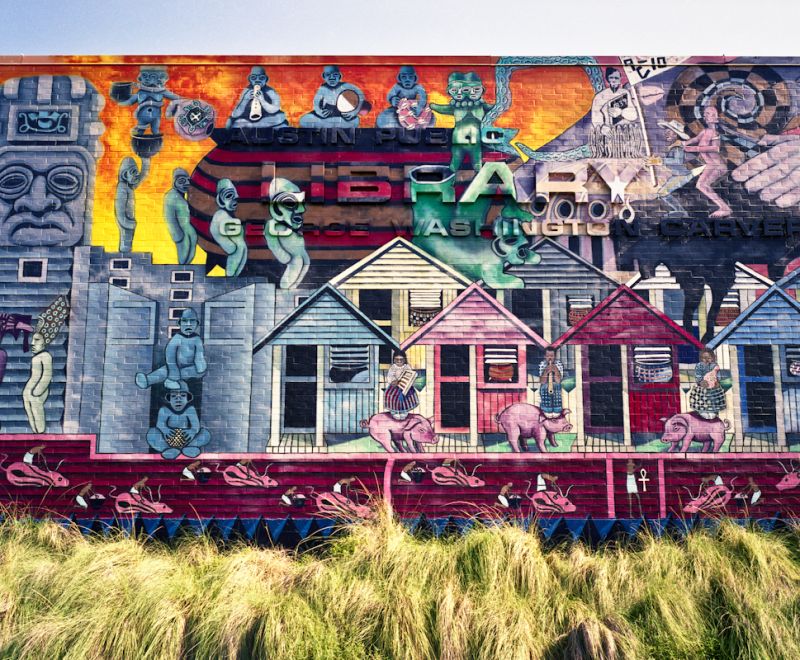 “The African-American community in Austin had lobbied for years and years to get a library in their segregated communities. Finally, they were able to get the city to come up with the money to be able to build the library. On the outside, they had painted this amazing mural. It was the first time that I had seen any public art reference to segregation and slavery. It stood out because it’s really about the whole African diaspora, the slave trade, the Middle Passage, and slavery in the South. It’s just a very moving example of art within or outside of public libraries. Often, the public art in libraries is quite a reflection of what the community values, what it cares about. This is just one example of that.” 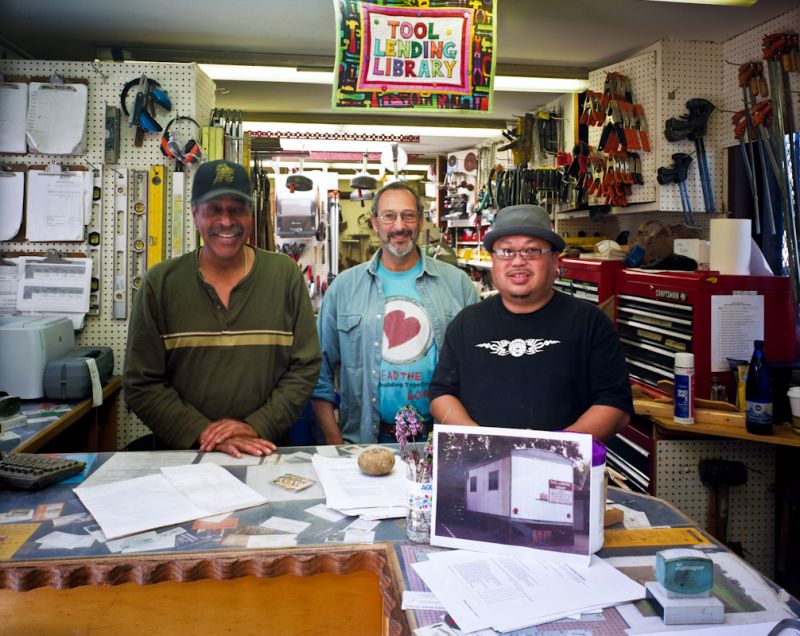 “This place was filled to the gills with people checking out, you know, backhoes, weed whackers, levels, chain saws — just all kinds of equipment. The library system in Berkeley got that libraries can be more than just books. It’s really useful. The three guys that I photographed were the librarians working there, and I had to get them to hold still for a second while I took the picture because they were so busy. The minute I took the photograph, they were off doing something else. It also shows the racial diversity of the librarians there, too, and the sort of culture we have here in the Bay Area.” 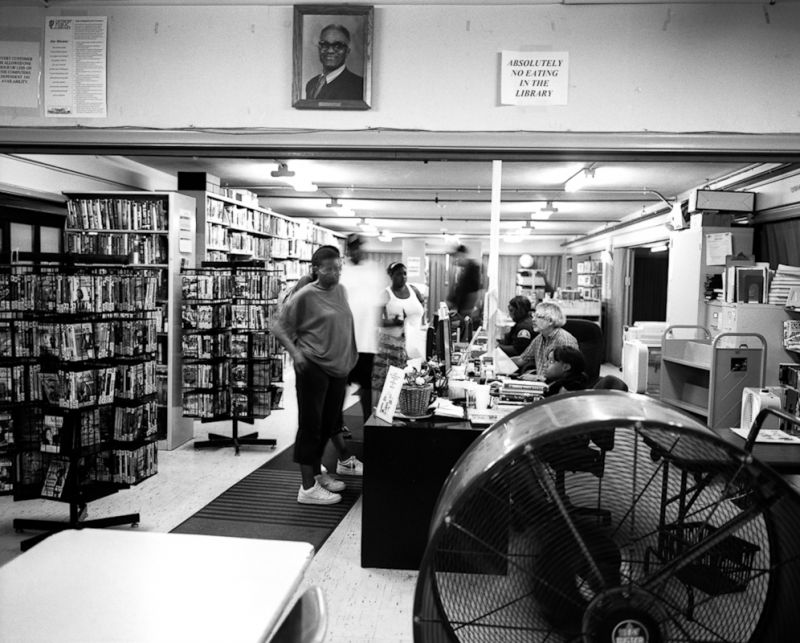 “We happened to be in Detroit on the hottest day of the year in the history of Detroit. It was brutally hot, and coming from San Francisco, we’re just not used to that kind of stuff. Now, this particular branch had been in a beautiful brick library that, for a lot of reasons wound up being shut down, and so the library had been moved to the basement of a church. So, this poor community without much resources, they had they’re library open, but it was a pretty awful thing. There was no AC in the building, and there was just one big huge fan. But there was a librarian. There were several guards; all the branch libraries in Detroit have an armed guard with a pistol on his hip or her hip, at the door just kind of guarding. And there were lots and lots of people checking out books.” 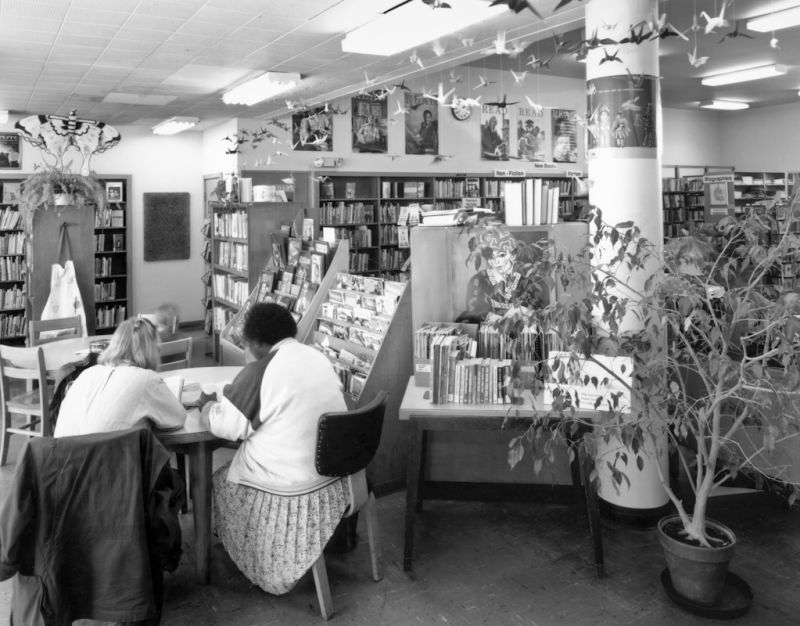 “This is actually one of the earliest pictures that I took of the project. I started in 1994 photographing all the branch libraries in San Francisco. We have 24 branch libraries. It’s a very, very successful library system, and there’s a lot of emphasis placed on books. One of the things the library supports is the idea of literacy isn’t just necessarily something for kids. It’s also adult literacy. A lot of people that are adults don’t know how to read, and they have to kind of limp along between the cracks not being able to read. But somehow, some people are able to bring themselves to take reading lessons. That’s what’s going on here.”

Featured photo: this library was built by ex-slaves in Allensworth, California. (Photo by Robert Dawson, from his new book, The Public Library: A Photographic Essay)