What a 1967 Government Pamphlet Predicted About the Future of U.S. Cities

What a 1967 Government Pamphlet Predicted About the Future of U.S. Cities

Originally posted at Next City.
By Rebecca Tuhus-Dubrow. 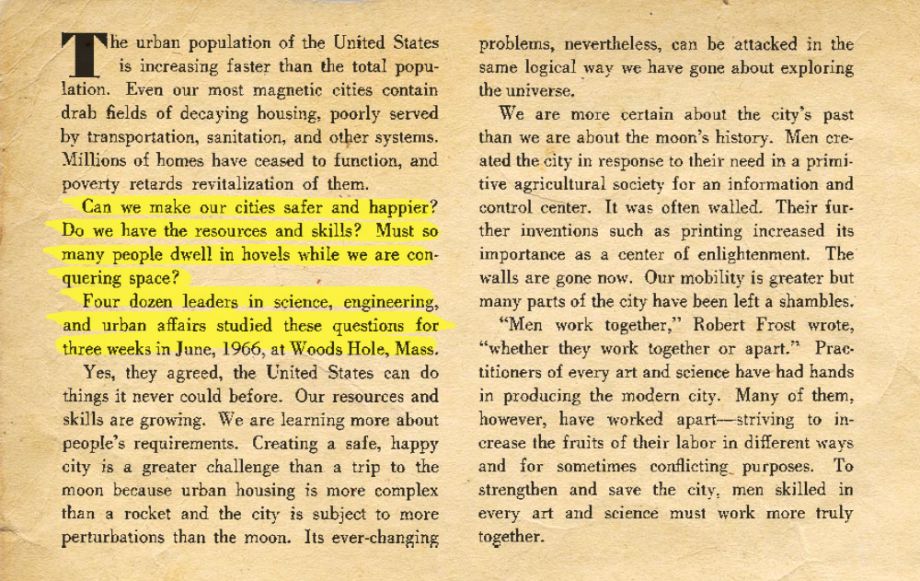 “Men invented the city … It is a frontier ripe for the approaches, the objectivity, and the tools of scientists.”

We hear similar claims today, if perhaps in more gender-neutral language. But this quote comes from a pamphlet, titled “Science and the City,” issued by the newly established Department of Housing and Urban Development in 1967.

The past couple of years have seen a surge of interest in studying cities through the lens of science: witness NYU’s new Center for Urban Science and Progress; books such as Michael Batty’s The New Science of Cities; this column.

But the concept is not new, as I was vividly reminded last week when I came upon the HUD pamphlet — a little faded but otherwise in good condition — in a box of discarded books at an MIT library. (As it happens, Michael Batty also stumbled on it a few months ago, and took the trouble to scan it and post it online, generating the images in this post. We’ve added a background for readability, but you should check out his full, original scan here.) In light of the recent appointment of a new HUDSecretary, it’s an opportune time to peer back at this snapshot of the department’s outlook nearly 50 years ago. 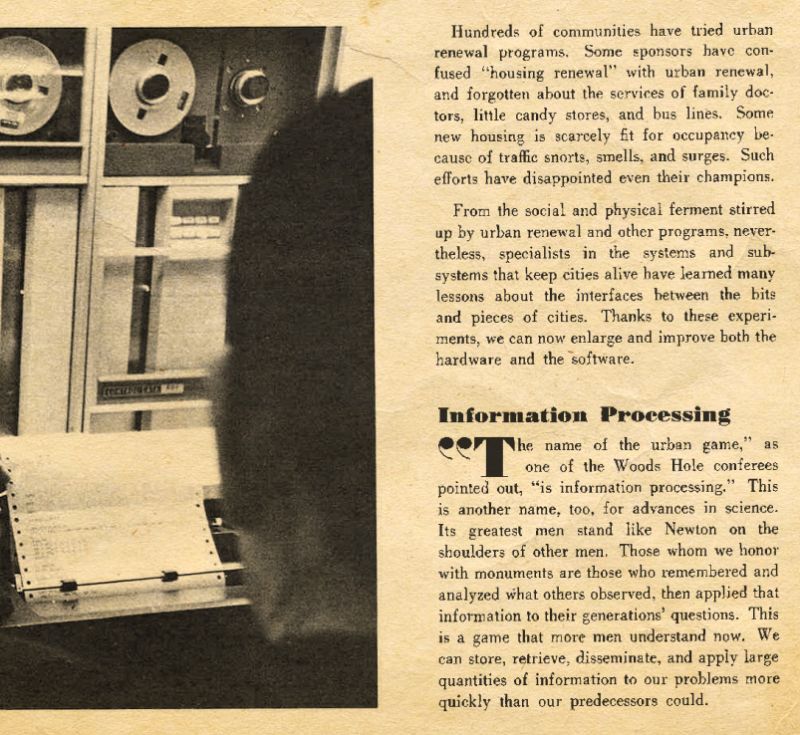 The booklet covers a three-week conference that gathered about 50 scientists from various disciplines (including a zoologist) and urban specialists to tackle President Lyndon Johnson’s call to “focus all the techniques and talents within our society on the crisis of the American city.”

Like any historical document, this one is fascinating for casting into relief what has changed and what has remained the same. The prose is surprisingly flowery and sometimes awkward (“Like the mountains and plains, the city has many lovers”). Conspicuous high-brow touches include a quote from Aristotle. Its price, 45 cents, seems at once quaintly low and too high: Shouldn’t a (presumably taxpayer-funded) government report be free of charge? 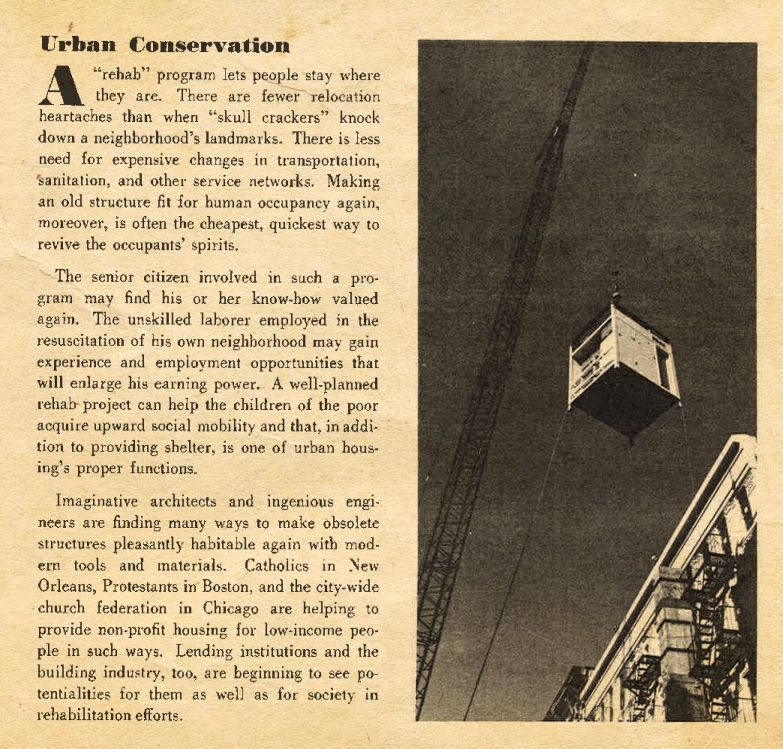 And its tone regarding the state of the city is strikingly different. In contrast to our current celebration of urbanism — embodied in recent books such as Edward Glaeser’s Triumph of the City and The Metropolitan Revolution, by Bruce Katz and Jennifer Bradley — the report repeatedly refers to the American city’s “sorry plight.” In 1967, riots had recently rocked a number of U.S. cities. The problems of the city were considered nearly synonymous with the problems of poverty. As the report puts it:

Everyone has seen the moving vans carrying the paraphernalia of prosperous people out of the central city to the green pastures on its edges. Everyone has read about the tide of the poor and poorly treated folk flowing into the housing left behind by more fortunate families.

In the years since, of course, those trajectories have often reversed.

To address the city’s pressing challenges — in health, mobility, housing, the environment — the report again and again invokes a successful model: space travel. In 1967, NASA’s program was in full bloom. Unmanned missions from both the USSR and the U.S. had landed on the moon, and soon the first man would set foot there. The scientific feats of the space program were breathtaking. On the one hand, urbanists saw them as an inspiration: “Creating a safe, happy city,” the report notes, can be achieved “in the same logical way we have gone about exploring the universe.” On the other hand, the report betrays exasperation that, given our evident capabilities, we have not managed to apply them more fruitfully to improving urban life. “Must so many people dwell in hovels while we are conquering space?” 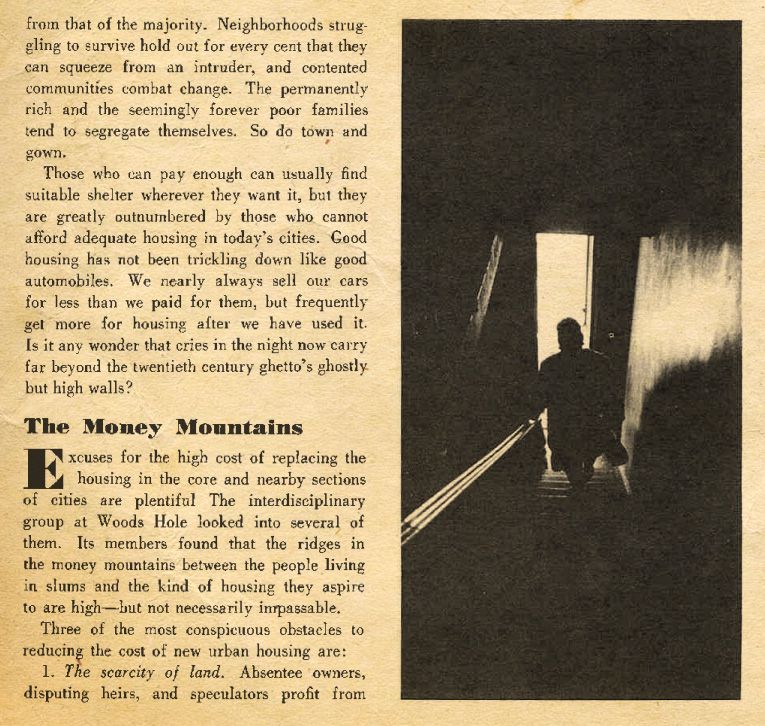 The pamphlet’s specific recommendations are rather skimpy. A couple of the proposals anticipate today’s technological advances, envisioning versions of smart traffic signals and driverless vehicles. Other ideas — greater use of tubes and tunnels — seem to hint at an alternate world that never materialized. But the details are less salient than the basic thesis that we should be applying our vast scientific knowledge in a vigorous, coordinated way to solve urban problems.

And that is what still sounds remarkably familiar: both the faith in our scientific potential and the frustration that it has yet to yield more practical results for cities. Even now, though space travel no longer looms as large in popular consciousness, we sometimes hear similar head-shaking laments: we put a man on the moon, yet we can’t seem to solve our problems here on earth. Notwithstanding the urban renaissance, many of the issues discussed in the report — inequality, substandard housing — could have come from today’s headlines.

In terms of science and the city, two questions emerge. One is whether we have the will to devote the funding and brainpower to cities that we devoted to space travel and the atomic bomb (also cited in the report). Sometimes the report implies that it is simply a matter of priorities. The other question is to what extent urban problems are susceptible to scientific resolution. As the report acknowledges, “Urban people’s safety and happiness depend not only on physical structures but also on their own biological needs and on the performance of economic and social systems.”

Both of these questions remain alive today. There is tremendous excitement about using science — in particular, data and technology — to enhance life in cities. But there are also concerns about whether we have the will to harness these tools in the service of the people, and about whether claims for their potential have been oversold. We have to be careful not to gloss over the complexity of urban issues. Science can do a lot, but it cannot resolve entrenched political conflict.

As Luis Bettencourt of the Santa Fe Institute wrote in a recent paper called “The Uses of Big Data in Cities,” “[T]he problems of cities are always primarily about people. Social and economic issues in cities define what planners call ‘wicked problems’ … These are the kind of issues that are not expected to yield to engineering solutions.” Or, as “Science and the City” concedes, “A city, of course, is a much more intricate combination of systems and sub-systems than a spaceship.”