Originally posted at Next City.
By Sarah Goodyear.

Green is not the first color that comes to mind when thinking of Los Angeles. Asphalt gray and dusty brown are hues more typical of the L.A. streetscape.

And yet this is a city set in a gorgeous natural setting of mountains and ocean.

The Emerald Necklace Expanded Vision plan, a multi-partner visionary project spearheaded by Amigos de los Rios and the Conservation Fund, aims to connect the forests of the San Gabriel mountain range with the waters of the Pacific through a network of public park space, bike and walking trails, and restored waterways. It’s an ambitious plan that will require coordination of the 88 cities and and dozens of public agencies in the L.A. Basin to achieve.

The executive director of Los Amigos, Claire Robinson, says her organization is up for the challenge. “It’s already started,” she says, pointing at the 10 parks within the proposed Emerald Necklace that Los Amigos has completed in the last 10 years. “Now we want to scale the project.”

The Emerald Necklace was inspired by a plan developed nearly a century ago at the behest of the Los Angeles Chamber of Commerce. In 1930, the Chamber commissioned Olmsted Brothers (the legacy firm of the great landscape designer Frederick Law Olmsted) and Bartholomew Associates to design a network of parks and green space that would provide recreational and health benefits to the residents of the rapidly growing city. Conflicts over jurisdiction and other power struggles meant that the Olmsted-Bartholomew plan was never executed, and Los Angeles today is a metropolitan area where many citizens lack access to such space. Only 36 percent of kids in Los Angeles live within a quarter-mile of a park. In San Francisco, that number is 85 percent, and in New York, it’s 91 percent.

The Emerald Necklace would change all that. The new, expanded plan provides, according to the Conservation Fund, “a comprehensive and strategic guide to creating a network of parks and public open spaces connected by river greenways and trails.” 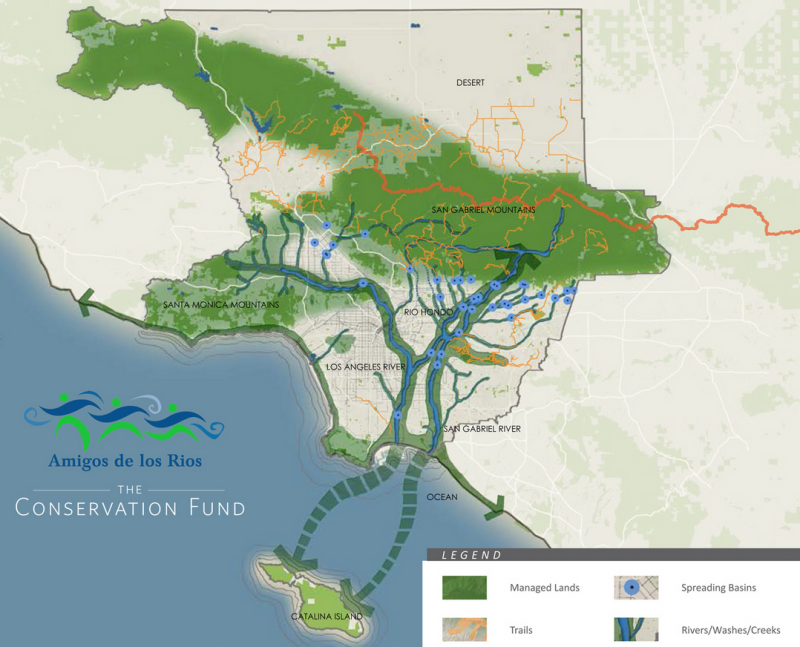 Underpinning the vision are several goals that can be used to help unite the various players — including city governments, utility companies, departments of transportation and railways — who can make real change happen.

These goals are: active transportation networks, such as walking and bike trails; the creation of green and gray infrastructure with multiple benefits, such as stormwater management as well as recreational use; a focus on enhancing public health through increased access to recreational opportunities; treating water as a precious resource; bolstering communities’ resilience to climate change; protecting and restoring wildlife habitat; celebrating regional culture; and fostering a green economy that creates jobs.

Some of this may seem like a big stretch for traditionally car-dependent, freeway-bound Los Angeles. But as the nascent billion-dollar initiative to restore the Los Angeles River has shown, this is a city that is reinventing and redefining itself in ways that defy stereotype. 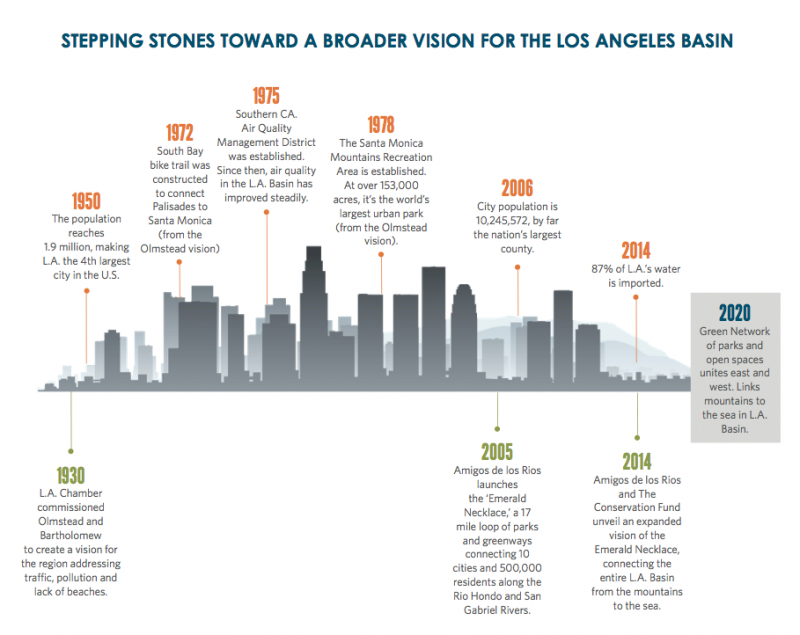 L.A. Mayor Eric Garcetti, for one, is fully on board. “The Emerald Necklace Expanded Vision plan is a visionary framework to link important L.A. area watersheds and the communities they touch,” he said in a statement. “Much in the way that our vision for the L.A. River encompasses its entire 51-mile length, both inside and outside our city limits, the Expanded Vision takes a regional approach to providing much needed open space in some of our most park poor neighborhoods.”

Will Allen, of the Conservation Fund, says he thinks the time has come for the greening of Los Angeles, and that the Emerald Necklace plan as currently formulated will make it possible for diverse interests to leverage their resources and work together toward common goals. It will take time, he says — perhaps 20 or 30 years — but he believes that the region is ready to seize the opportunity in a way it wasn’t back in 1930.

“I will admit this is probably the most complex political and institutional environment that we have seen around the country,” says Allen, who has worked on similar initiatives in cities such as Chicago. “I’m under no illusions that this is going to be easy. But my mantra is that if it were easy, it wouldn’t be any fun.”