5 Ways City Governments and Philanthropy Can Partner to Disrupt Inequality

5 Ways City Governments and Philanthropy Can Partner to Disrupt Inequality

“City government holds the key to innovation in this area – they bring authority, credibility, and a platform.”

During the most recent Project on Municipal Innovation (PMI) convening we held a roundtable discussion on how city halls and philanthropic organizations can best partner to disrupt inequality in cities. “Unless we do something to change the course we’re on,” Living Cities President, Ben Hecht, reminded us, “intergenerational poverty and lack of transfer of opportunity is going to continue.”

Foundation leaders noted that the public sector has a mandate to expand opportunity for low-income people. “City government holds the key to innovation in this area – they bring authority, credibility, and a platform,” said Benjamin Kennedy, Deputy Director for Community Development and Detroit at the Kresge Foundation. Philanthropy, on the other hand, brings a unique ‘risk tolerance’ to these endeavors. “Foundations can operate without political pressures – shining a light on less popular issues or elevating the interests of underrepresented communities,” Kennedy noted. 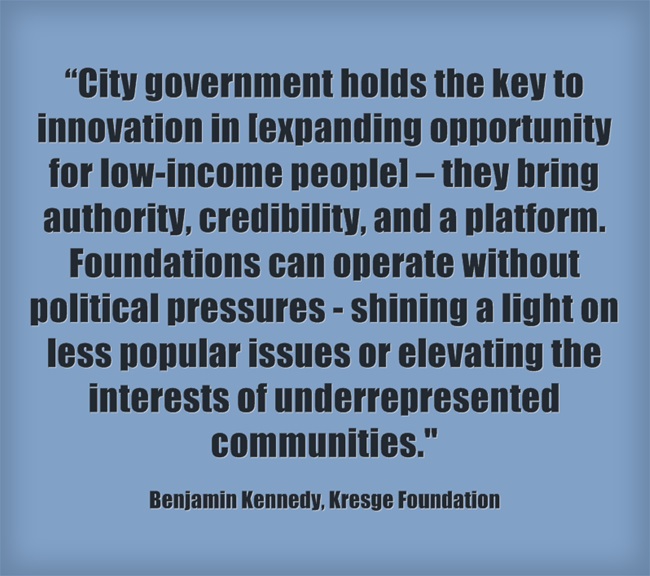 These five strategies highlight the critical engagement needed between the public sector and other key stakeholders aspiring to achieve meaningful, large-scale results in cities. For the public sector to be more innovative in how it uses its influence, authority, and resources to build shared prosperity for all people living in America’s cities, it needs to continue to build a shared dialogue and vision with philanthropy and other partners from across sectors and communities.

Trackdown Management Picking Up the Pieces