Branding: It’s So Much More Than a Logo

Branding: It’s So Much More Than a Logo

In October, Placer County officially unveiled its new brand and logo, an initiative designed to create a consistent, unified look of county products, services and presentations.  The entire effort was done in-house, over the course of about two years, with county staff working it in among their other projects when time allowed.

When I began working for the county in early 2015, I hoped to expand the use of that logo to apply to the government as well, but we didn’t want to just blindly make that change. So, the branding team launched focus groups, trying to hit as many people from various county offices as we could to capture a broad swath of Team Placer.

As a result of feedback received in the focus groups, the team developed a slight variation of the original logo to represent the county government, simply by adding the words ‘County of’ to it. As soon as we introduced that to the focus groups, it became clear we had found a winning combination.

On average, 85 percent of the people in our focus groups were very happy with the ‘County of’ version of the logo. Just adding that small change seemed to make it just official-looking enough to apply to the government, without altering the original logo (which is a registered trademark). That made it possible to have the original logo still represent the place that is Placer County, and hopefully communicate that part of the reason our ‘place’is so great is because of the very well-run government we have!

While we are thrilled about the consistent look and the positive impact this could have on the perception of Placer County, one of the best benefits of a logo is the clarity it provides to the public. When you look at a government building, vehicle, brochure, or even a t-shirt and see a government seal, it’s clearly government.

But that’s about all that’s clear. Without looking very closely, the general public can only see that it is government, without being able to identify if it’s a city, county, state or federal office. Replace that seal with a logo, and there’s no question where that service is coming from.

And to ensure that consistent image was easy for everyone to adopt, the branding team created branded templates for PowerPoint presentations, business cards, brochures, letters, fact sheets and other commonly used products. We also created a very detailed branding guidelines document that spells out the ‘rules’ of using our logo, what colors and fonts look best with it, and where to find the imagery that best represents Placer County.

As an added benefit, we fully expect these templates to create a cost savings to the county, both by reducing the amount of labor used to create unique products from scratch, and from the ability to buy in bulk for products like cardstock for business cards. 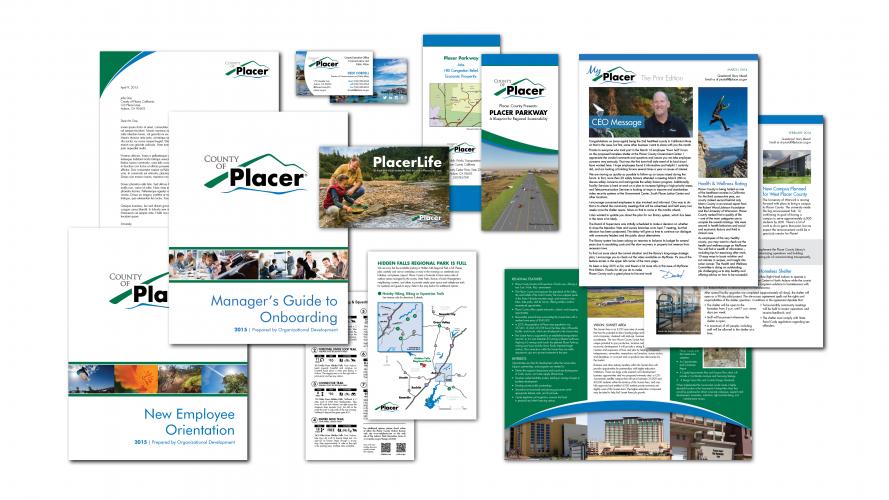 We’ve only just started down this road, and it will likely be a long process to get everyone on board, but the benefits to the county are great, and so far, it’s been well received.

“The logo is just a symbol – a visual representation of the Placer brand,” County Executive Officer David Boesch told employees in a county-wide email announcing the new branding. “It is the employees we have and services we provide that make the Placer brand special and amazing.”