New rules from the Governmental Accounting Standards Board are directing state and local governments to report more of their pension debt, a “hidden” and “unsustainable” long-term drain on basic services in the view of some critics.

“The GASB accounting rules will help to increase transparency, which will in turn focus local and state governments on ensuring they adequately plan for these important long-term obligations,” state Controller Betty Yee said in a news release.

Following the old rules, the Comprehensive Annual Financial Report last year only reported the pension debt for single-employer state plans, a $3.2 billion obligation for judges and a closed plan for legislators.

The new report this month for the fiscal year ending last June 30 includes the debt for the five plans in the main CalPERS fund, $39.4 billion, and the state share of more than a third of the CalSTRS debt, $22 billion.

Next year the new accounting rules will be used to report the debt for retiree health care promised state workers, estimated to be $74.1 billion in an update issued by Yee in January.

This year a much lower state worker retiree health care debt is reported, a “net OPEB obligation” of $22.3 billion under old rules based on the contribution shortfall. (Retiree health care is labeled “other post-employment benefits” in the financial reports.)

Half of the state’s reported overall “negative unrestricted net position” of $175.1 billion, which includes long-term obligations paid over decades, is debt owed employees. Well over a third of the total is outstanding bond debt, $67.1 billion. 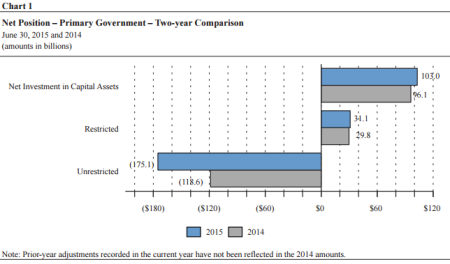 A decade ago, the accounting board had a major impact with new rules directing state and local governments to begin calculating and reporting the debt or “unfunded liability” for retiree health care.

During bargaining with unions for new labor contracts, the state wants employees to begin contributing to their retiree health care in a pension-like prefunding expected to cut costs with investment earnings over time.

State workers have an unusually generous retiree health care plan that can pay 100 percent of the insurance premium for retirees and 90 percent for their dependents. For active workers, the state pays 80 to 85 percent of the premium, depending on bargaining.

Now, the impact of the new pension accounting rules remains to be seen. The rules are intended to put a public spotlight on pension debt, but will not be used by actuaries to set annual rates paid by employers.

A central issue in the debate over public pensions is the earnings of their investment funds. CalPERS expects its fund, valued at $301 billion last week, to provide about two-thirds of the money needed to pay future pensions.

Critics say the CalPERS earnings forecast of a 7.5 percent average is too optimistic, concealing massive debt and the need for a large and painful rate increase to pay for future pensions, which reformers think might trigger action to control costs.

Moody’s, a Wall Street rating agency, has used a 5.5 percent earnings forecast for pension debt. Some economists advocate an even lower risk-free bond rate because pension payments are guaranteed.

In a compromise, the new accounting rules allow pension funds to continue to use their earnings forecasts to discount future pension debt. But if their projected assets fall short, they must “crossover” to a risk-free bond rate to discount the remainder of the debt.