7 Tools to Fight the Opioid Epidemic

7 Tools to Fight the Opioid Epidemic

On April 7, the National City-County Task Force on the Opioid Epidemic brought together city and county leaders on this issue. The tools described in this post were among those presented to the local leaders by a variety of experts in the public health field who provided testimony to the task force.

In the U.S., we have reduced the number of smokers, the number of teen pregnancies, and the number of new HIV/AIDS infections over time. The lessons from these public health challenges can be applied to the present opioid drug epidemic.

Although a comprehensive and longer-term solution to the many issues tied together under the term “substance use disorder” will take holistic and systemic changes, some short-term solutions are having success in cities, towns, and counties all across America today.

Talk About the Disease

Substance use disorder is a disease that needs to be treated like a disease not like a crime. The chorus from health specialists and chiefs of police is that we cannot arrest and incarcerate our way out of this epidemic. While we will continue to disrupt the supply of opiates from drug cartels and pill-mills, more work is required on the demand side of this equation. This means focusing on treatment of a disease not on stigmatizing addiction.

President Obama has visited city after city listening to countless stories of opioid addiction. The grim realities of opioid overdose deaths have been given wide audiences thanks to major public broadcasting documentaries. Voices are bring heard. The practice of over prescribing opioids by doctors is already being reduced. Patients are asking about the addictive nature of pain medications. Parents are working to ensure that kids don’t get addicted to pain medications given for sports injuries. Every story told, every emergency proclamation made, and every community conversation held is one more step to draw attention to the issue and bring the nation closer to solutions. 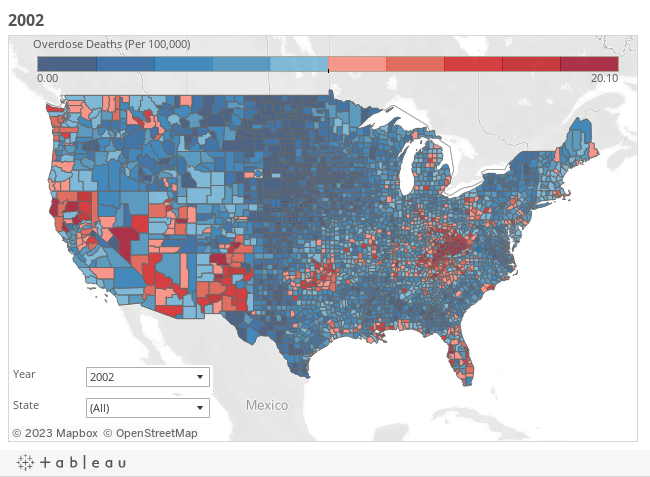 Use this interactive Tableau created by Socrata to select a year to see opioid deaths spread across the U.S.

Large pharmacy chains like CVS and Walgreens as well as local independent pharmacies have programs to take back unused and unneeded medications such as opioid pain relievers. These programs cannot rely on a top down approach from the White House Office of National Drug Control Policy (ONDCP) nor can they be implemented one or two times each year. Take back boxes need to be in every pharmacy and available every day. There also may be ways to manage take back programs from public buildings owned and operated by local governments.

A true wonder drug, Naloxone has the ability to reverse an opioid drug overdose. A simple syringe device which requires only a modest amount of training to use properly, Naloxone should be in the hands of every first-responder in America. Cities can even purchase a supply of Naloxone at a discount as part of the U.S. Communities Government Purchasing Alliance, of which National League of Cities is a national sponsor. In addition, state governments such as Connecticut have empowered pharmacists to provide Naloxone to any customer with a prescription for opioids.

Nearly every state has a prescription drug monitoring program (PDMP). Some are better than others in terms of ease of use and timeliness of the data. Not all physicians use the PDMP’s which makes even the best data incomplete. A November 2015 report from The Network in Excellence for Health Innovation has suggested a number of ways that PDMP’s can be made more effective. Good data is essential and knowledge from improved PDMP’s can become the most potent tool available to doctors and policy makers in the fight against substance use disorder.

The success of campaigns to reduce smoking and alcohol-related traffic deaths or to increase screenings for certain cancers and to live more active lives is driven by education. Reducing substance abuse disorder is no different. Whether the targets are children or adults, there are resources available to help prevent addiction from starting. While it is true that the experience with programs such as DARE (Drug Abuse Resistance Education) has not proven to be as successful has was forecast, that cannot deter communities from education efforts in schools, with families, and among work colleagues. The Substance Abuse and Mental Health Services Administration (SAMHSA) has developed a list ofresources to support education and prevention.

Watch the PBS Frontline documentary “Chasing Heroin” that originally aired on February 23, 2016 to learn more about the heroin epidemic.

Implement a clean syringe program. Even in cases where individuals have a concern about an action which may empower addiction, realize that needle and syringe exchange programs protect the wider community from other diseases such as Hepatitis C. There is no better example of the usefulness of a harm-reduction strategy than the case of Austin, Indiana in Scott County. This community of less than 5,000 people witnessed not only a significant number of opioid overdose deaths from 2013-16 but also the added incidence of more than 150 new cases of HIV/AIDS infection due to shared needles. A needle and syringe exchange program had been prohibited in Indiana until that decision was reversed in March 2015 after considerable damage already was done.

The first Drug Court was in Miami-Dade County, Florida in 1989. It was created by a group of forward thinking justice professionals determined to find alternatives to endless criminal justice interventions that did not address the underlying problem of substance use disorder. The Drug Court solution combines drug treatment with the criminal case discretion of a judge. Working as a team, law enforcement and medical professionals are able to reduce crime and costs to the justice system and change the behavior of Drug Court participants. Today there are nearly 3,000 drug courts operating nationwide.

To stay connected to the National City-County Task Force on the Opioid Epidemic, visit the webpage.