Groundwater Nitrate Sources and Contamination in the Central Valley

Groundwater Nitrate Sources and Contamination in the Central Valley

Originally posted at the California Water Blog.
by Katherine Ransom and Thomas Harter.

In California’s Central Valley, many communities depend significantly or entirely on groundwater as their drinking water supply. Studies estimate the number of private wells in the Central Valley to be on the order of 100,000 to 150,000 (Viers et al., 2012; Johnson and Belitz, 2015).

Elevated nitrate concentrations in groundwater can be a problem for private well owners, community service districts, and municipalities who rely on groundwater wells. Drinking water with a nitrate concentration greater than 10 mg/L NO3-N (the drinking water standard known as the maximum contaminant level, or MCL) has been linked to health effects such as low infant blood oxygen levels, miscarriage, and certain cancers.

We recently completed several studies that show the extent of nitrate contamination in shallow groundwater and the likely sources of the contamination in the Central Valley. The results show that, at the private well depth, a relatively small area is predicted to exceed the MCL, but a large portion of the valley is predicted to have elevated nitrate (at the 5 mg/L rate, a concentration considered to indicate elevated nitrate levels from human impacts). The public well depth is overall less at risk, but still has a decent amount of area predicted to exceed 5 mg/L.

Nitrate is a naturally occurring form of nitrogen, but is also created in areas with excess fertilizer, manure, urban and food processing waste effluent applications, or septic leach fields spaced at high density.  Much of the excess nitrogen (N) is converted to nitrate, which eventually makes its way into groundwater where it can persist for decades or even centuries – a process known as nitrogen leaching.

Other sources in the Central Valley are estimated to leach 20-25 thousand tons N to groundwater (urban areas: 10, municipal wastewater and food processing percolation basins: 4, dairy lagoons and animal holding areas: 6, and septic leach fields: 3). Manure production has increased exponentially since the middle of the 20th century through the mid-2000s, when dairy cow numbers levelled off. In contrast, fertilizer use increased predominantly in the decades after World War II and has largely levelled off since the late 1980s. Crop production has continued to increase steadily over the past 70 years (Harter et al., 2012; Tomich et al., 2016; Harter et al., 2017). 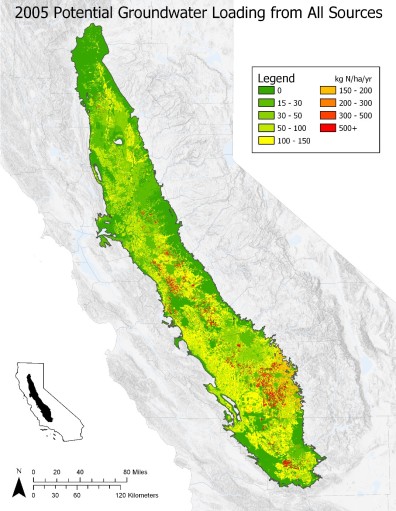 The amount of nitrate that leaches to groundwater (nitrogen loading rate) can be highly variable between different crop or land use types and among an individual crop or land use. This is due to differences in crop nutrient demands, soil and climate properties, and farm management techniques. Most measurements of nitrogen loading from crops are based on a few field studies performed over 30 years ago. The above estimates of potential nitrogen loading to groundwater are based on reports of N applications and N removal to harvest for nearly 60 different crops and on research about atmospheric N losses and other nitrogen pathways. But independent confirmation of estimates that are based on actually measured groundwater nitrate data has been lacking.

We performed a Central Valley analysis of domestic well nitrate data to relate groundwater nitrate to surrounding land uses and to estimate the amount of nitrogen loading from 15 crop and land use groups. This study focused exclusively on data from private domestic wells since they are typically more shallow and more likely to show impacts from more recent (5-30 years ago) surface activities on water quality. A database of recent nitrate measurements (past 15 years) from 2,149 private wells was assembled and the land use surrounding each well was determined (Ransom et al., 2017a). Using these data, we estimated a range of likely loading rates for each crop or land use type.

Results of the study indicate confined animal feeding operations (dairies), citrus & subtropical crops, and vegetable & berry crops to have the highest estimated nitrogen loading rates, while rice, water & natural land use, and alfalfa & pasture crops have the lowest. Many crop and land use groups have overlapping estimated ranges.

The groundwater nitrate-based estimates and the average potential leaching rates obtained from mass balance analysis are fairly consistent for Citrus & Subtropical, Vegetables & Berries, Field crops, Grapes, and the Water & Natural group. However, mass balance-based estimates are greater for Manured Forage crops, Nuts, Cotton, Tree Fruit, and Rice. Groundwater-nitrate-based estimates for urban areas and CAFOs appear largely consistent with reported data.  Lower estimates of nitrate leaching, when compared to estimates of nitrogen loading, are partially due to the (multi-)decadal travel time between the source of nitrogen leaching and the location of domestic  or other production wells where nitrate was sampled. But possibly also due to some natural attenuation of nitrate in groundwater (denitrification).

Other sources besides manure and fertilizer may also contribute to groundwater nitrate concentration, including septic waste and natural sources (though natural sources typically contribute very minimal amounts.) Also, the amount of nitrate in an individual well is often the result of several nitrate sources. We quantified the amount of nitrate from each of four sources (manure, fertilizer, septic, and natural) in 56 private wells in the San Joaquin Valley (Ransom et al., 2016). Results of this “fingerprinting” study indicate that multiple nearby sources have likely contributed to an individual well’s nitrate concentration; it also shows some regional patterns in groundwater nitrate sources: manure sources are often more dominant in private wells located in dairy regions such as Hilmar, while fertilizer sources are more dominant in the citrus crop regions of Orosi and Woodlake. Septic system sources were shown to be a dominant source in some wells on the outskirts of urban centers where septic system density is high. The study also demonstrates that – without detailed site-specific investigations – significant uncertainty exists about a specific nitrate source’s contribution to the nitrate measured in a particular drinking water well. 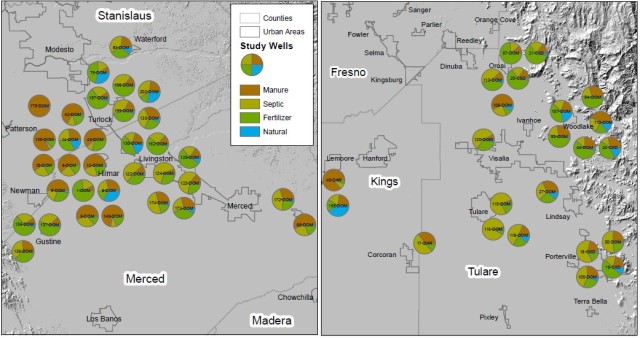 Estimated amount of nitrate from each of the four sources, as percent of total, for each study well. Wells with overlapping pie charts were offset to prevent overlap.

Finally, a joint effort between UC Davis and the USGS resulted in a high resolution estimation of nitrate concentrations across the Central Valley, at the average depth of a private domestic well and, separately, for the average depth of public supply wells (Ransom, et al. 2017b). These maps were developed by considering 146 mapped variables that potentially relate to the risk for groundwater nitrate contamination. These included soil and climatic variables, and recent estimates of groundwater age, nitrogen accounting, and groundwater chemistry.

The 146 maps were compared to nitrate measurements from over 5,000 private and public wells, taken during the past 15 years. Using a machine-learning algorithm to find patterns in the data, we created a ranking of which variables were the most likely to affect groundwater nitrate concentrations at the two depths. Among the 146 mapped variables, groundwater chemistry related to denitrification, historical nitrogen application amounts in agriculture, groundwater age, well distance to rivers, and amount of natural land use surrounding wells (among others) were rated as the most important to determine a location’s nitrate concentration. 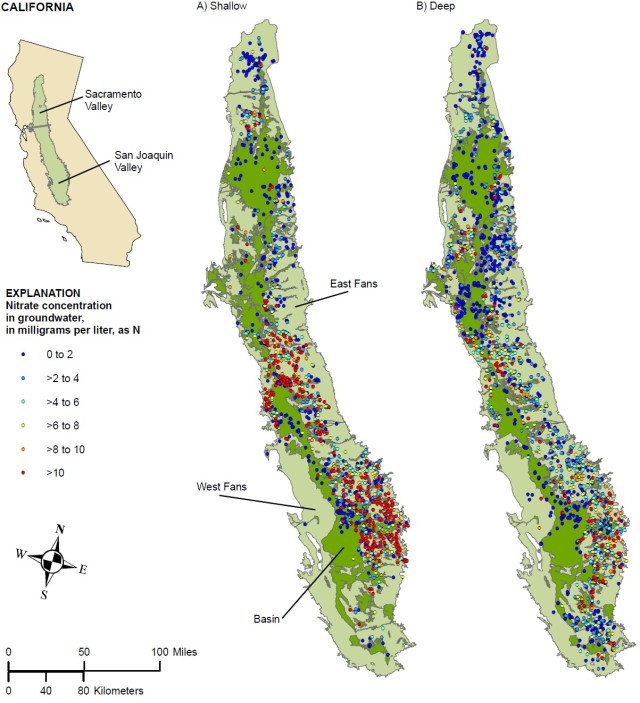 Prediction of groundwater nitrate at median depths of private and public supply wells (54.86 m and 121.92 m, respectively). Unmapped (white) area within the Central Valley boundary was due to missing data.

Efforts are ongoing by agriculture and State of California agencies to better control sources of nitrate contamination through improved crop nitrogen management, while also developing programs to support affected communities with drinking water treatment and alternative supplies. These programs recognize that nonpoint source pollutants require an approach that is different from traditional groundwater pollution programs given the large number and broad distribution of nitrate sources, and the resulting wide-spread groundwater nitrate pollution. Our work supports the strategy taken by these efforts, which focus on regional source control and more support for drinking water treatment and alternative supplies. With this research, we hope to highlight areas where nitrate contamination is most likely to be elevated, provide further evidence for the regional scale contribution from various nitrate sources, and help focus nutrient management and educational efforts.

Katherine Ransom graduated in June 2017 with a PhD from the University of California Davis, Hydrologic Sciences Graduate Group. Her work has focused on statistical models of groundwater contamination. She is currently working as a postdoctoral researcher with the United States Geological Survey through UC Davis on predicting and mapping groundwater parameters in the Great Lakes region. Thomas Harter is a groundwater expert at the University of California, Davis.