The cost of providing health care for retired state and local government employees, a benefit rarely found in the private sector, was mostly ignored until around 2007, when a government accounting board said the debt should be calculated.

So little attention was paid to the growing retiree health care debt that it’s still called “Other Post Employment Benefits” in government reports, a catchall phrase for benefits beyond pensions that could include life, disability, and long-term care insurance if offered.

Then in 2008 a governor’s commission reported the California state and local government retiree health care debt for current workers and retirees was $118 billion over the next three decades.

Last month a Wall Street rating agency, Moody’s, issued one of the most detailed reports yet on how California local governments are handling retiree health care costs. A look at 15 cities found slow progress.

“Few cities have meaningfully reduced these liabilities to date because most cost-containment strategies will take years to provide substantial savings,” said Moody’s.

Thirteen of the 15 cities in the study are prefunding retirement health care, putting money in a pension-like investment fund to help pay future costs as recommended by the governor’s commission in 2008. Fresno is still pay-go, only covering the annual cost.

A retiree health care prefunding trust opened by CalPERS in 2007, the California Employers Benefit Trust, has investments from a wide range of local governments, 552 with a total of $9.2 billion as of March 19.

Prefunding can take several decades to build up enough money to begin reducing costs. Other cost-cutting strategies found in the Moody’s study include scaling back benefits, increasing employee contributions, buyouts, and switching to optional 401(k)-style plans.

The study found only one dramatic debt reduction. The Glendale City Council voted 5-to-0 in October 2015 to end nearly all retiree health subsidies. The city’s retire health care debt or unfunded liability dropped from $191 million in 2011 to $16 million in 2017, Moody’s said.

“In California, cities have made broader changes to their OPEB programs than pension plans, because retiree health care benefits are often not subject to the same stringent legal protections as pensions,” Moody’s said.

“Nonetheless, the legal flexibility to reduce benefits does not necessarily equate to political ability or willingness to cut them.”

“Cities are seeing once manageable costs for pensions and retiree health care programs grow much faster than revenues,” said the report.“Increasing post-employment costs are crowding out the provision of services to our communities.”

The League report, saying each city’s situation is unique, offers a number of strategies. Two of the three case studies in the League report describe retiree health action by two cities in the Moody’s report, Beverly Hills and San Luis Obispo.

Cities that provide health care for active employees through the California Public Employees Retirement System, a large purchaser of health care second only to the federal government, are required by state law to provide retiree health care.

In cities with CalPERS premiums for active and retiree health care are usually pooled or “blended.” That raises costs for active workers but lowers costs for retirees, who would pay a much higher premium on their own because of age-related health risks.

To give cities more flexibility, the League launched the Health Benefits Marketplace, which allows a choice of plans for active employees from “the best carriers in the state” and a way to transition retirees to “leading health insurance carriers” in the individual market.

This type of “unblending” is what Glendale did. Former Councilwoman Laura Friedman, who voted against the proposal in 2009 but for it in 2015, said the arrival of the Affordable Care Act or Obamacare made the difference for her, the Glendale News-Press reported.

Many cities do not provide retiree health care, the League report said. A CalSTRS survey in 2011-12 found 29 percent of teachers had lifetime employer health care support, 49 percent some employer support until age 65 Medicare eligibility, and 11 percent none.

Among large private-sector companies with health care for active workers, a Kaiser foundation survey found that 66 percent provided retiree health care benefits in 1988 and only 25 percent in 2017.

State employees, expected to work longer under Brown’s pension reform, are eligible for Medicare at age 65, said the analyst. Until then Obamacare can provide low-cost health insurance coverage, pre-existing conditions included, and sometimes with subsidies.

Annual state retiree health payments, now $2.2 billion up from $458 million in 2001, will increase to match employee contributions. The payments are expected to grow for 30 years until the debt ($91.5 billion as of June 30, 2017) is paid off and payments sharply decline.

The current payment is about 1.7 percent of the state general fund, up from less than a half of one percent 15 years ago. State employees hired before Brown’s pension reform can retire at age 50. This fiscal year the state premium payment for a family of three is $21,456.

For cities, where employees are often half of total costs, retiree health care can take a larger budget bite. In the Stockton bankruptcy, the biggest cut by far was the replacement of a $545 million long-term retiree health debt with a $5 million lump-sum payment. 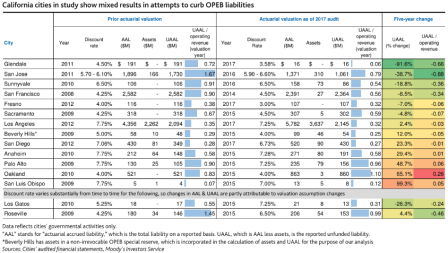