No matter at what level you are engaged in politics here in the Golden State — Governor or a legislator, County Supervisor or a city councilmember, a Superior Court Judge, a news reporter or blogger, or one of the thousands of parties either trying to get government at some level to do something (or in many cases, not do something) – it is an accepted fact that when big-box store giant Walmart wants to open a “super center” store anywhere, local opposition often appears and a big battle ensues.

There are certainly cases where a Walmart just skips into a town somewhere without a hue and cry, but examples of those don’t come readily to mind… 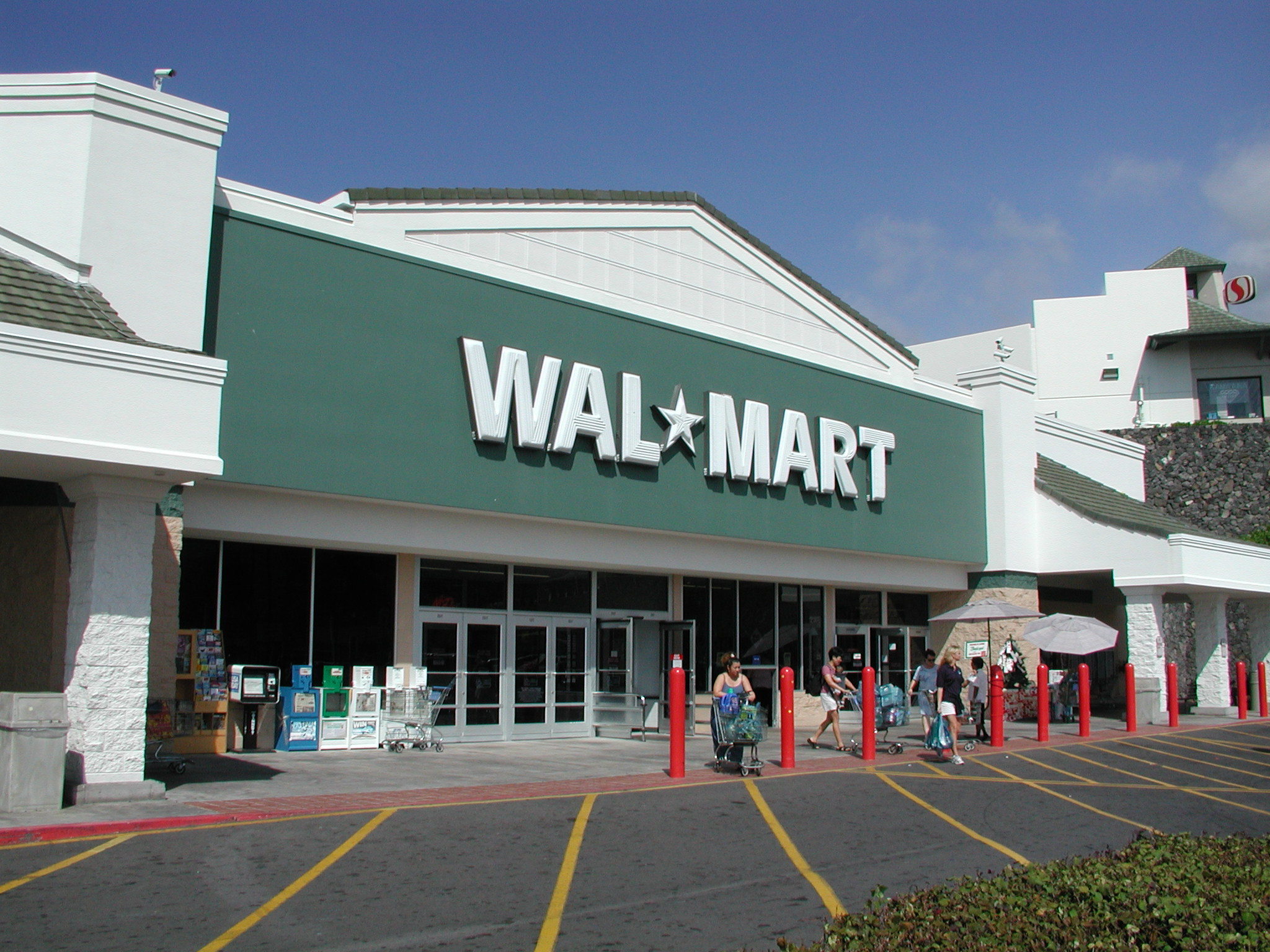 Recent revelations have come to light that create a very plausible reason for the consistent, organized and funded opposition to most new Walmart supercenters.  Based on a story that appeared earlier this month in the Wall Street Journal, Rival Chains Secretly Fund Opposition to Walmart, there may be someone with a big, cushy office at Safeway Foods who waits for news of a potential Walmart popping up to compete with some of their local stores, and when they get a “live one” – they pick up the proverbial bat phone and call in, “The Saint!”

Who is this superhero that is available at a moment’s notice to come in and rescue large grocery chains like Safeway from the specter of low-priced competition that will force them to in-turn lower their prices?  The superhero is P. Michael Saint (pictured below, right).  Saint and his company have literally made a business out of “killing Walmarts” all around the country – they are rumored to have stopped hundreds of proposed Walmart developments, and substantially delayed the building of many others.  I am guilty of using a little “tongue and cheek” rhetoric in calling Saint a superhero, though if you are someone who has to compete in the free marketplace against Walmart, he may indeed be just that to you.  But for the average consumer, who looks to a healthy system of supply, demand and competition to make sure that he or she is getting the best quality products for the lowest possible price, Saint may actually be more of a super-villain. 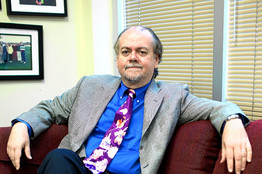 Before I got into more details about “The Saint” – let me first make it clear that the growth of Walmart throughout the United States is certainly a reason for others in the grocery business to give pause. Walmart currently has more than 2,700 supercenters (so called “big box” stores that sell groceries and general merchandise).  Last year, over half of Walmart’s $258 billion in U.S. revenue came from grocery sales.  With that kind of operation, I can see where other grocery market chains would be concerned about Walmart’s growth.  That having been said, as a consumer, I expect that if my local grocery store of choice wants to keep my business, they should be using normal techniques to do so – novel concepts like competitively priced products of good quality, and good customer service to ensure my loyalty.  Like most shoppers, I already have plenty of choices of grocery stores in my neighborhood – I go to the one I do because it is the best.   But I can tell you now, if I regularly shopped at Safeway, I might be inclined to give them the heave-ho and go elsewhere, possibly at personal expense and inconvenience.

There is nothing that is more of a turn off to me than interests trying to manipulate the wheels of government, at any level, to secure an unfair advantage against their competitors, which is exactly what they apparently do…

According to this remarkable and troubling article in the Wall Street Journal, Pleasanton-based Safeway, “retained Saint to thwart Walmart Supercenters in more than 30 towns in California, Oregon, Washington and Hawaii in recent years, according to a Saint project list and interviews with former employees.”

But wait, it gets better – apparently it wasn’t just Safeway’s management who engaged in this sort of activity, the article says that, “Former Saint employees say much of the work consisted of training Safeway’s unionized workers to fight land-use battles, including how to speak at public hearings” – and the article says that often times Saint is actually paid, in part, by unions themselves.

So when you next read an article about local community “outrage” about a Walmart coming to town – or perhaps you get to experience it in the first person if Walmart’s trying to come to your town – you’ll need to understand that there is a very likely possibility that Walmart’s competitors have hired Saint Consulting to make a big stink.  How do they do this?  Saint’s company has engaged in over 500 different campaigns to stop development of one sort or another through recruiting local opposition (want to make some money by being outraged?), bringing in professional out-of-town organizers and providing financial resources for Lord-knows-what (petition printing and gathering, buses, signs, websites, mailings, newspaper ads – the list is as endless as there are ways to use money).   Oh yes, they also bring in land-use professionals, attorneys, and other “hired guns” to do their work.   But don’t look for the proverbial men in black suits, or a lot of Saint Company business cards, as Saint tells the Wall Street Journal that, “most of their work is clandestine,” – seriously.

This excerpt from the Journal article is worth reprinting verbatim…

For the typical anti-Walmart assignment, a Saint manager will drop into town using an assumed name to create or take control of local opposition, according to former Saint employees. They flood local politicians with calls, using multiple phones to make it appear that the calls are coming from different people, the former employees say.

They hire lawyers and traffic experts to help derail the project or stall it as long as possible, in hopes that the developer will pull the plug or Walmart will find another location.

“Usually, clients in defense campaigns do not want their identities disclosed because it opens them up to adverse publicity and the potential for lawsuits,” Mr. Saint wrote in a book published by his firm.

Mr. Saint says he “encouraged” his employees not to use their real names in campaigns in order to protect the client’s identity and “to protect our employees, who have been followed, threatened and harassed by the opposition.” 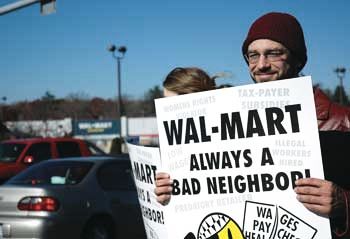 It is not hard to find images of protesters holding up anti-Walmart signs on the internet, such as the one to the right.  But after finding out about how major competitors of Walmart are hiring companies as sophisticated as Saint, you now have to wonder if the protesters are even local.  If they are, then one wonders how much they are being paid to hold up their professionally printed signs…

There are a few examples out there right now of contemporary battles taking place here in California over the construction of new Walmart stores.  To pick one, Walmart has been working with the city of Merced to locate a new distribution center in town, but due to strong “local opposition” Walmart appears to be pulling back from their plans to build.  The local opposition comes from a group that calls themselves the Merced Alliance for Quality Growth (MAQG), who is suing in court to try and stop the project.

I note that the judge hearing the case (that has been dragging on for years) said, “Walmart may pack it up and go down to Madera.  They want Walmart down there.”

Interestingly, after the publication of this article about Saint, the attorneys for Walmart are now asking for discovery to find out who is paying the fees for MAQG’s attorney.

Want to bet that if Walmart decides to pursue a Madera site instead, that someone in some corporate office somewhere will pick up the bat phone and call Saint?  Within five minutes, in a rather “clandestine” manner, someone will reserve a website for the Madera Alliance for Quality Growth…

This is a serious problem, and the best antidote for it is public awareness.  If you are local official that makes land use decisions – a Supervisor, Councilmember, or a planning commissioner – or perhaps a local judge who hears cases about land-use disputes, just be aware that you may actually be an actor in a dramatic production, largely choreographed for your benefit, by competitors who simply don’t want to compete.

The unfortunate fact is that the real losers are California consumers, who deserve the best quality products at the most affordable prices – and great customer service.  It would appear that some interests out there are more interested in using government to stop their competition, instead of just doing a better job.