The CA Economy: A Strength vs. Weakness Breakdown

The CA Economy: A Strength vs. Weakness Breakdown

The problem with analyzing California’s economy — or with assessing its vigor — is that there is not one California economy. Instead, we have a group of regions that will see completely different economic outcomes. Then, those outcomes will be averaged, and that average of regional outcomes is California’s economy. It is possible, even likely, that no region will see the average outcome, just as we rarely see average rainfall in California.

California’s Silicon Valley region continues to be a source of innovation, economic vigor, and wealth creation. But the Silicon Valley, named because silicon is the primary component of computer chips, no longer produces any chips. The demands for venture capital are also changing, with the demand for cash falling because new products often take the form of apps instead of something that is manufactured. This type of investing doesn’t need the infrastructure that the Silicon Valley provides. Increasingly, other communities such as Boston, Northern Virginia, and Houston are becoming centers of technological innovation.

Workers recognize the changes. They may not know the reasons, but they know the impacts, and they are voting with their feet. Domestic migration — migration between states, — is a good measure of how workers see opportunity. California’s domestic migration, in a dramatic reversal of a 150-year trend, has now been negative for over 20 consecutive years. That is, for over 20 years more people have left California for other states than have come to California from other states. Workers simply haven’t seen opportunity in California. How can this be? Why would people be leaving when jobs are being created in the Silicon Valley? 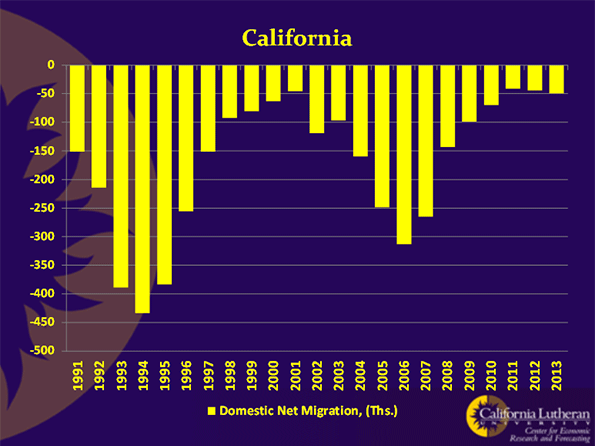 The Silicon Valley jobs are rather specific. They require higher skill sets than most workers possess. One consequence is that the Silicon Valley’s prosperity hasn’t helped California’s other workers much. We are left with a situation where California’s tech firms search worldwide for workers, while California workers search for work.

It didn’t have to be this way. High housing prices and environmental regulations, a result of state policies, have driven away the jobs that could be performed by typical California workers. Those jobs are now in Oregon, Texas, or China.

A short distance away, in California’s Great Central Valley, there is poverty as persistent, deep, and widespread as anyplace in the United States. A recent report shows that California has three of the 20 fastest growing US cities in terms of jobs. It has four in the bottom 20.

For a while, at least, the differences between California’s fastest growing regions and its slowest (or declining) areas will grow. In general, coastal areas will see more rapid economic growth than inland ones. Even within these broad regions, there will great heterogeneity. Bakersfield, boosted by a booming oil sector, will see stronger growth than Stockton. San Jose, with its thriving tech sector, will see far more growth than Santa Barbara or Monterey. Furthermore, the best performer among California’s inland cities will probably see faster growth than the slowest growing coastal city.

On average, California’s economic growth will be far below its potential. In most of the state it will be disappointingly low to dismal, as California’s economy is held back by well-meaning but seriously flawed regulations. At the same time, a few super-performing cities may see spectacular growth, at least for a few years.

Eventually, even California’s most vibrant economies will slow, gradually strangled by the lack of affordable housing and of an infrastructure necessary to move people from affordable housing to their jobs. People are willing to drive very long distances daily in pursuit of the twin goals of income security and the American dream of a home in the suburbs. The traffic on Highway 14 between Palmdale and Los Angeles reminds us of this twice every working day. But, they need roads, and affordable housing within commuting distance.

Different growth rates and different levels of economic vitality will exacerbate the vast gulf that exists between California’s wealthiest communities and its poorest. Inequality will increase as California’s fabulously wealthy become ever wealthier, and California’s poor suffer in surprising silence, living on whatever aid we give them, denied the hope and the basic dignity that comes from a job.

Domestic outmigration will increase, but the people who leave won’t be California’s poorest. Instead, young middle-class people will lead the exodus, as they move to wherever opportunity is more abundant. This, of course, will further increase California’s inequality and decrease its economic vitality.

We will also see an increase in consumption communities. Already, many of California’s coastal communities are reflexively averse to any new activity that actually creates value, opting instead to become ever more exclusive playgrounds for the very rich. These communities will see rising home prices as they restrict new units, and will see rising demand, a result of ever greater concentrations of wealth worldwide and the unmatched amenities available in Coastal California.

By contrast, some inland areas will see declining home values and eventually declining populations, as the lack of opportunity drives potential home buyers to places like Phoenix and Houston.

For many of us, this is a depressing forecast, and it is fair to ask whether or not it is inevitable. It isn’t. Few things are. At a statewide level, I hope that representatives of California’s large and growing minority communities demand policies that support the opportunity that previous generations of Californians enjoyed. Absent such demands, California’s policies are unlikely to change.

At a local level, cities would do well to eliminate all policies that contribute to economic stagnation. When a business is making locational decisions, it reviews lists of positive and negatives for the candidate communities. No place has only positives, and few places have only negatives. California cities are endowed with one huge positive: California is a wonderful place to live. That’s not enough, though. A city would do well to minimize the list of negatives.

For businesses, an aggressive minimum wage is a negative, as it raises costs. Uncertainty and delay in a city’s response to an economic proposal increases the risk and costs of proposals. It’s a negative. So is unaffordable housing, as it increases wage demands and makes it harder for businesses to recruit top talent. The best way for a city to encourage the supply of affordable housing is to allow new-home development.

Finally, areas of economic blight increase crime, raise city costs, reduce city revenues, and are unattractive to businesses considering moving to or expanding in an area. Cities need to be flexible in responses to proposals for these areas. Our work at CERF convinces us that we will need less commercial space in the future. Therefore, almost any proposal for dealing with these areas is preferable to inflexible adherence to existing zoning or plans.

This is the second part of a two-part report. Bill Watkins is a professor at California Lutheran University and runs the Center for Economic Research and Forecasting, which can be found at clucerf.org.