Water-Independent Riverside Forced to Cut Use by 28%

Water-Independent Riverside Forced to Cut Use by 28%

The grousing over Gov. Jerry Brown’s April order of sweeping cutbacks in water use — from 12 percent to 36 percent, depending on local factors — was widespread and instantaneous. Farmers in urban areas objected to facing more cutbacks than those in rural areas. Complaints from agencies which have done a good job in improving water supplies but still faced sharp cuts received plenty of attention, such as this Associated Press story focusing on the San Diego County Water Authority.

But perhaps no community has more cause to be upset than the city of Riverside. In the name of preserving limited water supplies in the Bay Delta, a city that gets no water from the Bay Delta and has taken many successful steps to be water-independent has been forced to cut water consumption by 28 percent. The Riverside Press-Enterprise elaborates on why city leaders have chosen to sue the state, seeking a temporary restraining order and injunction:

Riverside has its own groundwater supplies from the Bunker Hill Basin and is independent of imported water, said Kevin Milligan, deputy general manager at Riverside Public Utilities. …

The city applied to the state to be included in a special tier requiring only a 4 percent reduction, but was denied. The 4 percent tier requires a reliable water supply, but applies only to surface water, not groundwater, he said. …

To make itself water independent, the city has invested in the John W. North Water Treatment Plan, drilled new wells, captures storm water from the Seven Oaks Dam and has spent $10 million dollars on recycled water infrastructure, he said.

Thought it has been drawn down in the drought, the Bunker Hill Basin has at least 1.4 million acre feet of storage left and maybe as much as 5.4 million acre feet, Milligan said. One acre-foot of water is enough to serve two families for a year.

State authorities also rejected Riverside’s separate request for a 24 percent reduction instead of a 28 percent cut, disputing the city’s claim that it didn’t count college students in deciding which tier the city would be in.

The city of Riverside has regional company in being consumed with water issues and concerns about how to respond to the drought. 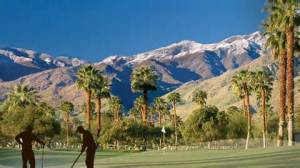 As CalWatchdog reported in June, officials in Palm Springs and throughout the Coachella Valley are facing criticism over the vast amounts of water it takes to keep their 124 golf courses and dozens of resorts green and attractive. The explanation that the tourist region has plenty of cheap water thanks to plentiful underground aquifers — despite being located in a desert — hasn’t stemmed the criticism.

Meanwhile, the Elsinore Valley Municipal Water District, which serves more than 130,000 people in Lake Elsinore, Murrieta, Wildomar and many unincorporated communities, also has been subject to a mandatory 28 percent cut even though it has “already reduced water use by more than 25 percent since 2007 – surpassing the state’s mandated 20 percent by 2020 per capita goal established in 2009. … [Having] these new restrictions unfairly penalized our customers, who have set one of the best examples in the state over the last five years,” Elsinore Valley board President Phil Williams wrote in the Press-Enterprise.

Brown’s emergency water edict expires in February; under state law, it can only extend a maximum of 270 days. Water officials are expected to begin discussions soon on what rules will replace the existing ones.

A key factor will be whether the winter’s expected winter “Godzilla El Niño” brings the massive amount of rain that some — butnot all — scientists expect.