How Bad Is the Digital Divide in California?

How Bad Is the Digital Divide in California?

In California in 2016, the state that practically invented the Internet, 30% of Californians (nearly 12 million people) do not have meaningful broadband at home, according to an August 2016 survey by The Field Research Corporation.

This article, part one of a two-part series, will look at the historical data on the Digital Divide and the new data from the recent Field Poll. This data will provide the context necessary to understand the problem and formulate appropriate public policy solutions. 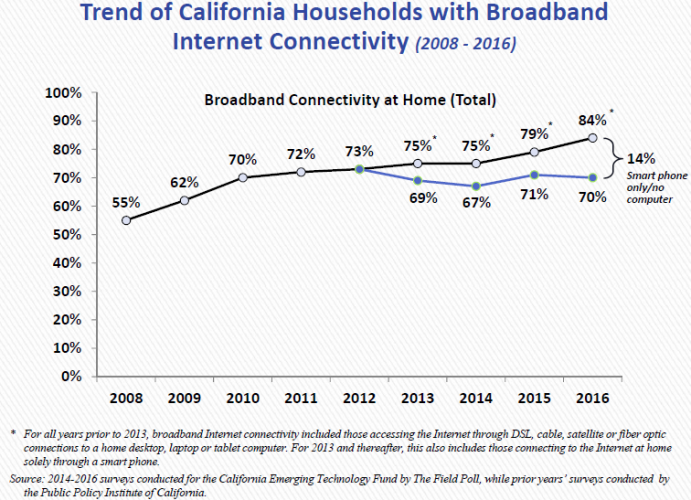 The graph to the left provides some historical context for California’s current Digital Divide. The overall broadband (i.e. high-speed internet) adoption rate has increased significantly since 2008, climbing from 55% in 2008 to 84% as of July 2016. However, that 84% is really illusory and doesn’t paint a full picture. California’s broadband adoption rate is at 84%, only if we include the 14% of people whose only access is on a smartphone.

The California Emerging Technology Fund, which commissioned the survey, is technology neutral but recognizes differences in technological functionality. Smartphones do not have the necessary functionality to be an appropriate substitute for laptop or desktop computers. Because smartphones have small screens, small keyboards, and limited functionality on websites and applications, individuals who rely on them are considered “under-connected”—in other words, they are not able to fully compete in the digital economy.

Because of the limitations inherent in smartphones, and because 14% of Californians are “smartphone only” users, it is more accurate and appropriate for policy makers to use the “meaningful” broadband adoption rate of 70%.

To really understand why and how a 30% Digital Divide exists in California, it is necessary to understand the terms “access” and “adoption.”

Access has to do with the physical infrastructure necessary to bring broadband into a home, apartment, school, library, workplace, etc. A community that does not have broadband infrastructure is labeled an “unserved” or “underserved” area (with speeds below what the federal and state governments define as “broadband”). “Unserved” means broadband is simply not available, as the infrastructure does not exist to connect that community. “Underserved” means Internet speeds are too slow for properly transmitting the amount of data necessary to have meaningful functionality. The California Public Utilities Commission (CPUC) considers an area served if broadband is available at speeds of 6 mbps downstream and 1.5 mbps upstream, or greater. And recently, the federal government redefined broadband as 25 mbps up and 3mbps down. 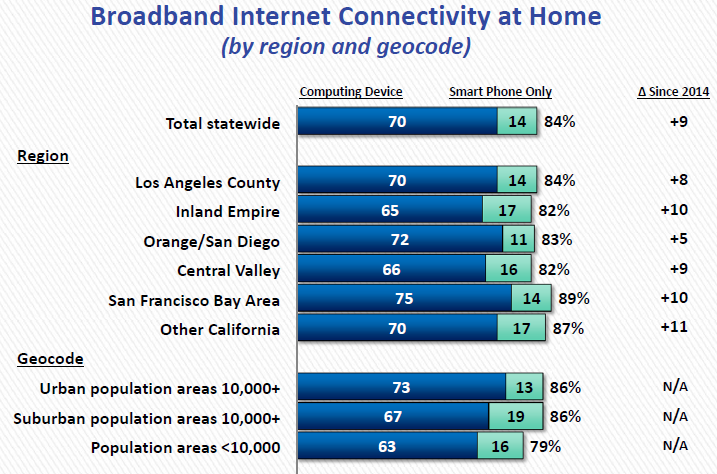 Lack of access is predominantly a rural issue, because many rural areas lack the fiber optic cable infrastructure that enables broadband. The “Geocode” section of the chart at left illustrates that point, showing that as the population in an area declines so does the broadband adoption rate. Because of distance and often challenging terrain, it costs significantly more to deploy the infrastructure necessary to reach and connect rural communities.

Broadband infrastructure is generally built by the private sector, which argues that because of the much smaller customer base in rural areas, it does not make financial sense to serve those areas. In areas lacking broadband, consumers either forego the Internet entirely, or depend on dial-up or satellite Internet service that provides speeds significantly slower than broadband.

Adoption is the process of a consumer signing up for broadband from an Internet service provider (either stand-alone or as part of bundled service). Numerous studies have shown that many low-income households do not “adopt” broadband, because the cost of the necessary computing device and the monthly fees are more than they can afford.

While the overall actual broadband adoption rate is 70%, the 2016 Field Research Corporation analysis of subgroup data shows the Digital Divide is worse among vulnerable populations. 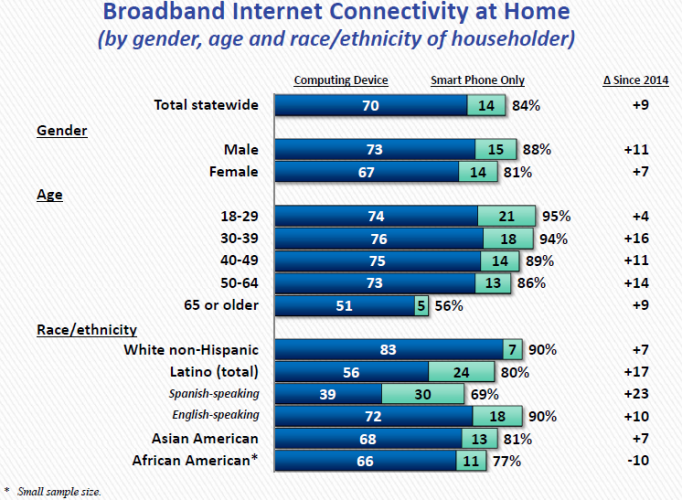 Age and ethnicity are also significant indicators of broadband adoption. The chart below provides the data for these groups and others. Among seniors 65 and older, only 51% have broadband at home, and monolingual Spanish-speakers also significantly trail the state average.

People with disabilities also have lower broadband adoption rates. Different disabilities require different equipment to enable computer use, and the equipment is often expensive. From a screen reader for the visually impaired to alternate input devices for those with muscular control disabilities, devices add a layer of cost and difficulty.

In Part 2 of this series, Which will be posted September 14, I will discuss why broadband access and adoption are matters of public policy, and look at some policy recommendations for closing the Digital Divide.

Lloyd Levine is a former California Assemblymember and chair of the Assembly Utilities and Commerce Committee. He is the co-founder of the UC Riverside Center for Broadband Policy and Digital Literacy, and runs his own consulting firm specializing in technology policy. lloyd@filamentstrategies.com.