CalPERS took another step last week toward a gradual long-term rate hike, a move to lower the risk of big investment losses as the maturing pension system enters a new era.

Retirees are beginning to outnumber active workers. Pension payments to retirees are no longer covered by employer-employee contributions and investment income. Now “negative cash flow” forces the sale of some investments to cover annual pension costs.

The new need to routinely sell some investments (see two charts at bottom) is one of the reasons the California Public Employees Retirement System is expected to have even more difficulty recovering from investment losses in the future.

After a loss of $100 billion in the recent recession, the CalPERS funding level dropped from 100 percent in 2007 to 61 percent in 2009. It has not recovered, despite a major bull market in which the S&P 500 index of large stocks tripled.

“Even with the dramatic returns we have seen over the past six years, because the demographics of plans in general have changed and plans are now by and large cash-flow negative, it’s been very challenging to dig out of that hole,” Andrew Junkin, a Wilshire consultant, told the CalPERS board last week.

The funding level of CalPERS in fiscal 2013-14 was 77 percent of the projected assets needed to pay pensions promised in the future. But investment returns last fiscal year were below the forecast, 7.5 percent, causing the funding level to fall again.

“With the estimated 2014-15 investment returns of 2.4 percent, that funded status is expected to drop to a range of 73 to 75 percent,” said Cheryl Eason, the CalPERS chief financial officer.

In a loss equaling the state general fund budget at the time, the CalPERS investment fund dropped from about $260 billion in the fall of 2007 to $160 billion in March 2009, before climbing a little above $300 billion early this month.

Critics say the CalPERS earnings forecast, an average of 7.5 percent a year, is too optimistic and conceals an even larger funding gap. The board is working on a “risk mitigation” strategy that could slowly lower the forecast to 6.5 percent over 20 years.

When the earnings forecast goes down, some of the pension fund can be shifted to less risky bond-like investments. The yield is likely to be lower, but so is the chance of big losses in an economic downturn.

The CalPERS chief actuary, Alan Milligan, recommended lowering the forecast to 7.25 percent to provide a cushion or “margin for adverse deviation” as in the past. The board phased in the rate increase over two years to ease the impact on employer budgets.

Two more rate increases followed: a change in actuarial method in 2013 and a projection of longer life spans last year. Now a total employer rate increase averaging roughly 50 percent will be phased in by the end of the decade.

Under the proposed “risk mitigation” strategy CalPERS would consider lowering the earnings forecast in good years when the annual investment return is well above the current earnings target of 7.5 percent.

Brown aides urged the CalPERS board to consider using its existing policy to speed up the lowering of the earnings forecast. The rate increase resulting from a lower forecast would be phased in over five years and amortized or paid off over 20 years.

“If the current investment assumption of 7.5 percent is an unacceptable risk today — by the nature of this conversation it seems everyone is more or less in agreement that it is too high — the board should consider lowering it sooner rather than later,” Eric Stern of Brown’s finance department told the board.

Richard Gillihan, a CalPERS board member and director of Brown’s human resources department, said he agreed with the administration position and asked for an explanation of why the existing policy for lowering the forecast is not being used.

“It just seems like it’s too easy to pat ourselves on the back and say, ‘We came up with this plan,’ and then we are not doing anything with it for a few years and then a future board might change it.”

The CalPERS chief actuary, Milligan, said the proposed strategy balances the need to lower investment risk with concern about the impact on the budgets of 3,000 local governments, some in better financial condition than others.

“I would be concerned about the amount of strain we would put on some of our public agency (local government) employers,” Milligan said of dropping the earnings forecast too quickly. “Apparently, it’s not such a concern for the state.”

In the past, CalPERS rate increases only hit employers. But now many employees are included. A pension reform calls for employees to pay half of the pension “normal cost,” which excludes the debt or “unfunded liability” from previous years.

Milligan said the 50-50 split of the normal cost is required for local government, CSU, judicial and legislative employees. But the reform did not require a normal cost split for most state workers. Their rate is set by legislation resulting from bargaining.

In an example, over two or three decades miscellaneous employee rates could increase by a half to 1½ percent of pay and safety rates by 1½ to 3½ percent of pay. The timing would vary among plans, depending on the reform and demographics.

The CalPERS staff recommended a “blended” path with check points, perhaps every four years, when a lower earnings forecast would be considered. Rate increases would be more certain and predictable.

Union representatives argued for a “flexible” path when a lower earnings forecast would only be considered after a year with great investment returns. Rate increases would not be on “autopilot” and would be less likely to happen after a year of bad returns.

A spokeswoman for the League of California Cities told the board cities surveyed split on blended vs. flexible but were in favor of taking action to lower investment risk. A spokesman for special districts said they favored a blended plan.

The CalPERS board, in an 8-to-4 straw vote, directed the staff to prepare a flexible plan for a first reading in October. The final vote on a risk mitigation strategy may be in November. 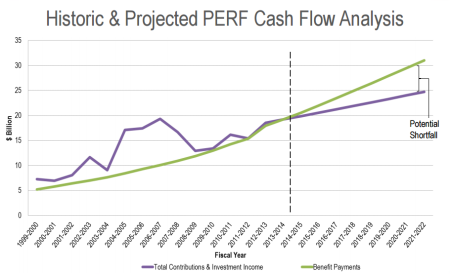 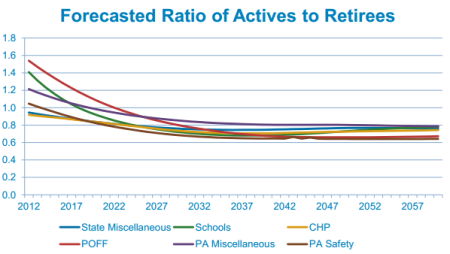